I got out at around 3PM. Lots of people out on the lake today. It was pretty much overcast the whole time. Right about 9PM it rained for a little bit. There was a light breeze out of the NE.

I put in at the Platte Lake Access and headed North. Right after I stopped I saw a fish swirl, so I casted over there and was rewarded with a 14" bass on the PB&J Yum Wooly Bug. I had another bite and it felt like a good fish but it didn't hook up and that was the end of that. I switched to a white Stanley Phantom(spook) and nailed a pike right away on that. I had a few more hits on the Phantom maybe catching one more pike and a bass. I followed up a miss with a red shad Zoom Super Fluke and got a decent bass. On the next cast it got bit off. I cast out again and the Fluke got ripped right off the hook. I tried a pink X-Rap and got a few pike on that. I switched the Phantom to a chartreuse tiger and got a 16 bass right away. Then I nailed this 18.5" 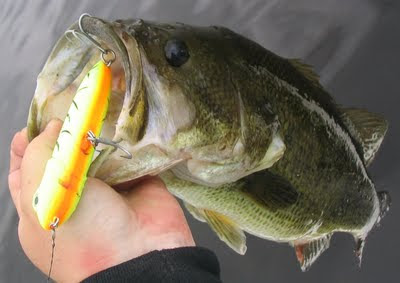 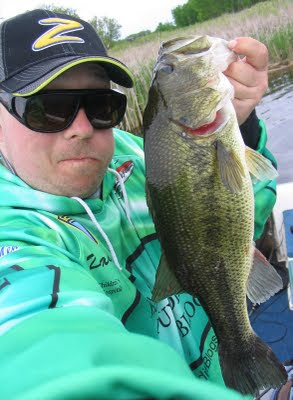 Low and behold I looked down the way and saw the brown Tuffy of Bass Pundit blog reader Mike B. We chatted for a while. He told me a few things. He had mostly been getting pike and the bass were spread out. He went South and I continued North. I kept fishing the chart Phantom and was rewarded with a good bass every so often and there were several missed hits. I think I might have had 2 dogfish follows, but I couldn't get bit on a follow up bait. In one particular spot I got 3 bass in close succession. It started to rain and that was the end of the action.