A little after 4pm I headed out to fish. The weather today was cloudy and in the mid 50's and I made the mistake of not bringing my Fisher of Men Club jacket. I made a quick stop at Bulldog and was unsurprised that I caught nothing.

Next I headed to the Rock public access where I was fortunately protected from the NE wind. The ice on Rock just went out last night or this morning and so it wasn't much of a surprise that the dock wasn't out yet. I fished for a couple of hours but Rock was dead, not a single sunny. A little after 6pm I headed over to Jenny's (Platte) but the wind was blowing in there so I headed for the GOMH.

Nobody was at the GOMH so I headed down to the SW side. There was more current than I have seen this Spring. I tried a Cubby Mini-mite with a minnow below a bobber for quite awhile without so much as a sniff. Eventually I decided to try an 1/8oz Storm WildEye Swim Shad in baby bass. I have been using a white one that kind of swims on it's side without any success. After quite a few casts I felt a thump and a battle was on. I saw a tail first and thought it was probably a toothy bullhead, but then I saw the tail again and it had some white so I knew I had me a golden bullhead. Here is the fish: 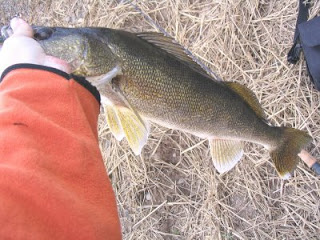 It was 24 or 25 inches long and 4 or 5 lbs. Before I caught the fish I had resigned myself to the fact that I was going to skunk today, so this was a pleasant surprise. I tried the Wildeye for a little while longer, then I switched back to the Cubby and Minnow. I started getting quite cold. At about 8pm I had a couple of nibbles but the bobber didn't go fully under. I decided I couldn't take the cold anymore and headed out early.
Posted by Basspastor at 9:53 PM