Doing My Worst for Earth Day 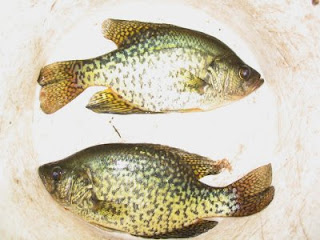 Today was Earth Day 2009 and I thought I wouldn't do my part but would instead try to deplete some of the silver bullhead reserves of Mother Earth. I went to Rock first and the Rock Dock was still not out and nothing was happening. I arrived at the GOMH around 7:30pm and there were guys fishing the SW and SE shore. Both of these guys are regulars at the GOMH but not considered Grumpy Old Men. The one guys name is Tim or Tom and he has been known here at the blog as the Foul Mouthed Dad; His son was not with him tonight. I'll call the guy who was on the SW side Bucket Man because he sits on a bucket.

Anyway Tim/Tom welcomed me and told me that he caught a huge bass on a beetle spin. He said he had caught a bunch of bass, 3 crappies, and a nice sunfish. I fished on the SE side with him and got into some jumpin bullheads right away on the pink Flu Flu and a minnow. Meanwhile Bucket Man landed a couple of nice silver bullheads. I think when he got to #3 he was now at his 10 silver bullhead limit and so I took over on the SW side right around 8PM. I struggled to get the silver bullhead to go, missing the first 3 bites that I got. GOMH regular Scott showed up and started whacking little silver bullheads on the SE side, so I asked him what he was using and that prompted me to make a change to a Custom Jigs Glow Demon. I missed a couple more bites then landed the two decent silver bullheads that I did get (Picture). I got 1 more smaller silver that I through back before I had to put a light on my bobber. Tim/Tom caught a 3to4lb dogfish. After dark I would have stuff play with me but nothing would take the bobber down. They were getting an occasional fish on the SE side.

It's pretty weak that I only got 2 fish. Scott caught a bunch of silvers but most of them were not keepers. I talked with Scott for a while and then left.
Posted by Basspastor at 11:04 PM