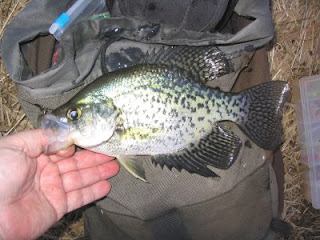 Today at about 2:30PM I headed out on a road trip. First stop was Reeds Sporting Goods to pick up a CRCX610MH, which is a Shimano Crucial 6'10" Medium Heavy X fast casting rod. I got one last year and liked it so much I decided to get one this year too. The rod is versatile and can fish jignpig, swim jigs, chatterjigs, Texas rigs, Super Flukes, Senko's, spinnerbaits, and buzzbaits.

From Reeds I headed off to the South end of Knife Lake to see what was up there. There were quite a few people fishing on the pier, a few on shore, and a few boats. I saw quite a few crappies being caught buy most of them appeared to be on the small side and were getting tossed back. I fished for a little bit, but with the wind in my face couldn't get my bobber out to where the fish were which was out towards the end of the pier. Around 3:30pm I hit the road for Rush.

Since the wind at Knife seemed to be out of the SE I decided to hit the Eastern shore of Fransen Park on the North End of West Rush Lake. I was pleased to be able to get a parking spot in the small parking lot and off I went. My first spot was not ideal with a tree branch hindering my back cast and a line of catails between me and the water. I managed to get a couple of 6 inch sunfish on a glow Cubby Mini-Mite. After about 1/2 an hour the guys just to the South of me started packing up. I had watched them bring in a couple of crappies. Naturally I moved into their spot which had a free backcast and no cattails. They said the crappies were biting as far out as they could cast. Even though I had an 8 foot rod, the Wing It Bobber is not a distance caster especially because the wind was inexplicably coming out of the South Southwest. One of the guys offered to sell me a Rocket Bobber for $3. He bought the bobber for $3 off a guy who was fishing there wacking the crappies while he was getting nothing. I didn't have any money so I declined the deal. It turns out I had that exact same bobber with me, though I didn't know it at the time.

I think I may have picked up a sunfish and missed a few bites but it was pretty slow for quite a while. The people to the South of me were casting out quite a bit farther than me and were getting an occasional fish. An old couple from Lakeville moved in just North of me. I was shocked they would come that far to fish, but it turns out they had been at the Hinckley Casino and had decided to try a little fishing on their way back. Around the time they came I reached in my bag to look at my bobbers and I saw the Rocket Bobber so I put it on.

Unfortunately I didn't know what I was doing with the bobber at first. The bobber lays flat on the water and when a fish takes it the bobber stands up. I watched the bobber stand up quite a few times expecting a fish to take the bobber down but that wasn't happening. Eventually I figured out that if you set the hook when the bobber stands up you might actually catch a fish. I missed a good crappie and then the old lady caught a nice crappie and the old guy caught a sunfish; That was all they caught. I had been tipping the glow Cubby with a minnow but that wasn't working so great so I just went to the plain Cubby and started getting bit. I caught a nice 8.5" Sunny then a 10" Crappie (picture at top of post) and I began to think that I might start to hammer them. The bite seemed to go in spurts and all I could catch were mostly Ok sized sunfish. I probably caught a dozen keeper sized sunnies, but I don't like to clean sunfish and so I threw them all back. As it got toward dusk the wind quit and so did the bite. When I left I went over to the West shore and talked to a couple of guys that had been fishing in the cut with the pier at it's mouth. They caught lots of sunnies and no crappies. They said pretty much nobody was fishing the cut that comes in from the NW bay.
Posted by Basspastor at 11:42 PM