When I went into the Cities for my Fishers of Men Club meeting I hit up Cabela's and Gander Mountain.

First stop was Cabelas where they had a 34lb thrust Minnkota Trolling Motor on sale that I picked up so I could use it on my little boat which I plan to fish on Bulldog lake this year. In addition to that I picked up a shell white Lucky Craft Pointer 100.

As I wrote before I was going to buy a 100 Pointer to see if it will live up to the hype and they just happened to have several Pointers and other Lucky Craft's on clearance, so I went with one they had on clearance. I like white for a jerkbait color so it worked out good. Also on Clearance I picked up a white saltwater Rapala Skitter Walk 11 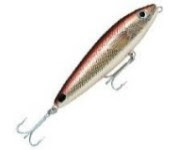 I have wanted to try a Skitter Walk for the past couple of years and getting one on clearance was an opportunity I could not pass up.

Last on my Cabela's shopping list was some Cabela's Aqua Glow Hoochie Koochie's. 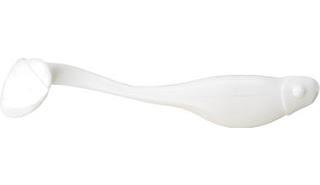 Cyberfish had a great deal of success on these Hoochie Koochies last year and I thought they would make a good swim jig and chatter jig trailer so I picked up a few packs.

At Gander Mountain the main mission was to see if they had any of those nice panfish rods that Cyberfish bought last year and sure enough the Maple Grove store had a couple Creekside Fishing Micro Series Crappie Pole's in the 8 foot length. The price was right so I picked one up. The label seems to indicate that these rods are a Gander Mountain brand or exclusive.

However, the bait monkey wasn't done with me as they had some Rapala's for 25% off and I couldn't resist.

I picked up a Glass Minnow Husky Jerk 14 and a Baby Bass Husky Jerk 12. I was going to buy a couple of others but it wasn't clear that they were 25% off so I left them at the register.

I don't think I am going to go with any wake baits this year and since I didn't buy a Sebile Magic Swimmer when I was at Cabela's it is unlikely I will get one of those this year. Still, I don't think the Bait Monkey is through with me yet; I still have a $50 Reeds Gift Card that I got for my birthday.
Posted by Basspastor at 9:29 PM

I love buying tackle, too. Next best thing to fishing.
Tight lines