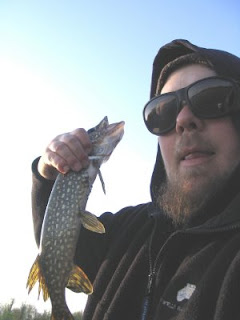 I started the night by heading to the GOMH. For the 1st time in a long time no one was fishing the evening bite when I got there. I started on the SW side and missed a couple of bites. I switched to the SE side and caught the little toothy bullhead in the picture on a brown/purple Monsoor Swim Jig. A little after 8PM I headed out to make some quick stops even though the wind was out of the NE which is a sucky direction for my usual haunts except the SE side of the GOMH.

Bulldog- Nothing
Rock Dock- Nothing
Jenny's- Nothing

I stopped at the Platte Lake place to take a picture of the dock and I got a few casts in catching a hammer handle on my last cast with the Monsoor Swim Jig.

Man do I hope the weather improves a bit, today was a bad joke.
Posted by Basspastor at 2:13 AM