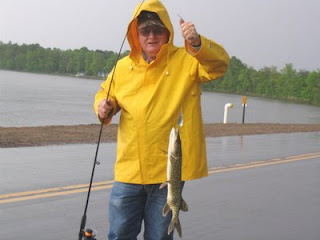 (Grumpy Old Man Willard shows off the pike he caught on a spoon)
Today Willard, Lee Ander and Lewis were all at the Grumpy Old Man Hole.

The plan was to try a repeat of Friday night where I would catch the bullheads in a feeding frenzy before a storm came through. It didn't quite work out that way.

I think I headed out around 4PM and when I arrived the NE & NW sides were covered leaving me to fish on the South (Sullivan) side into a wind that was blowing in at 20 and gusting to 30mph. I did manage a small toothy bullhead before I lost my 3/16oz white Strike King spinnerbait to a Norman Speed Clip malfunction when I backlashed. Fishing spinnerbaits with Norman Speed Clips isn't the smartest thing in the world to do. After about 20 minutes the guy fishing the NE side left and so I snapped that casting spot up. I caught a couple of quick jumpin bullheads on the Lost Jig. At some point Lewis showed up followed closely by Willard. Action was kind of slow but I would get a bite every now and then. It sprinkled for a spell and the wind switched out of the NW at about 7mph. I hooked into a decent 22+ inch toothy bullhead and gave it to Willard. I got a bullhead on a blue Brovarney Swim Jig as I was reeling it over the rice, so I went and gave a Zoom Horny Toad a try. I had a few little bites on the Toad but nothing to set the hook into. Eventually Lee Ander showed up and it started to rain. Since I wasn't catching much I went into the truck to sit things out. After about 20 minutes the rain slowed down and Willard went fishing and got his pike. With the rain about stopped I went out and fished with the Horny Toad again not having any luck. I switched up to using the Spro Rojas Popping Frog for the 1st time. I got a few hits but only hooked up with 1 14" jumpin bullhead, most of the strikes I got were pretty weak and either from little jumper or a small toothy or two. I caught a 3rd small toother on the Lost Jig and eventually put a gold Berkley Frenzy Popper on when things got calm and I nabbed a few jumpin bullheads on that. I got hungry so I left at 8PM even though it was really nice out and I could have probably continued to catch some fish.

All in all I ended up with 12 jumpin bullheads and 3 toothy bullheads.

On to Mille Laction:
I was hungry and we didn't have anything much to eat at home so I went to the local Bar and Grill, but their restaurant was closed, so I headed to Onamia to the Cedarwood, but they were closed so I went to DQ. Since I was close to Mille Lacs I figured I would hit up the Eddy's Jetty to try and bag me a smallmouth as it got dark. The smallmouth on Mille Lacs tend to turn on at dusk and dawn. It turns out I made a good choice because I nailed a 18.75 smallie and a 17.75 smallie on a 3/16oz white/chart with chart blades Strike King spinnerbait. Unfortunately I took the camera out of the car when I went home before I went out to eat.
Posted by Basspastor at 11:34 PM