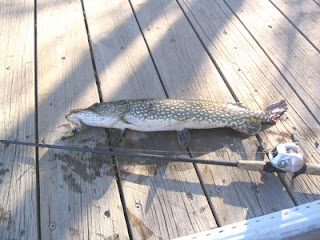 As far as I am concerned the Minnesota Fishing Opener is a 2 Day affair. The Minnesota Bass Fishing Opener happens on Memorial Day weekend and is a 3 day affair. I set my alarm to get me up at 4AM for a trip to Mille Lacs, but when the time came I turned the alarm off and went back to bed.

Rock:
I didn't get out fishing until 6:15PM and I started at the Rock Dock. On my first round of fan casting I caught 2 pike on the gold DM Custom Baits Piranha chatterjig. The first pike was about 16 inches and the 2nd was about 24." The 2nd pike just thumped it as I was letting the bait fall to the bottom on the intial cast. I switched to a orange/chart. X-Rap and proceeded to miss 3 bites. I had 2 of the fish on but didn't get to see them. I went through several more baits with nothing and went back to the orange/chart. X-Rap. I made a short cast because of a backlash and was watching the lure the whole way back when a pike just blasted it 7 feet from the end of the dock. I tried a while longer but couldn't get anymore bites.

Next I went to Jenny's and did get a bite that took the tails off my Speed Craw. I threw back and it hit again but didn't hook up, probably a small pike. I tried the lake place but didn't get a hit.

Last stop was the GOMH and when I arrived no one was there, but as I was getting my gear another car pulled in. I started on the NE side with a white/red Strike King Pure Poison chatterjig and I got a 14" jumpin bullhead on that. Next I threw the watermelon Monsoor Swim Jig all along the NE shore but didn't get bit until I was almost back at the bridge by another jumpin bullhead. The light was really beginning to fade and I headed across the road to the SE side. On my very first cast I nailed a toothy bullhead right by the spot I caught one last night. That toother is gonna be in somebodies frying pan. I worked the SE shore and got 4 more jumpin bullheads including 1 that was pretty close to 16 inches. It got pretty dark so I gave up when I caught that 6th jumper.
Posted by Basspastor at 11:35 PM