May 1-3
I arrived at the camp around 3:30PM and had the boat launched by 4:30PM. There was a mix up in communication so we ended up eating camp food rather than grilling our own for dinner. After dinner I went out with Gordy and Gary Pflipsen. We fished right by the camp and I could not get a white bass to go. Gary P. caught this sunfish which was the 1st fish of the weekend. 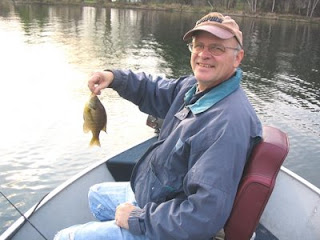 Not long after Gary's sunfish, Gordy pulled in this nice crappie. 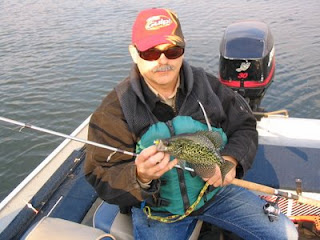 Gary P. got the first bass of the weekend, but it would not be in season until midnight. 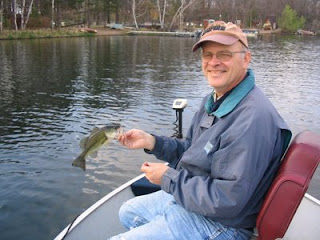 I drank to much milk for dinner and had to be let off at the dock so I could use the facilities. Here is Lowell Borgen, Jim ???, and Art Halverson just off the Camp Wapogasset East dock. 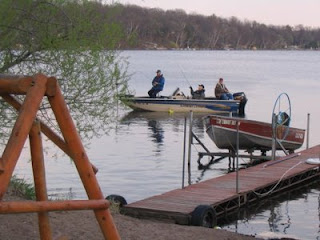 Our accomodations on this outing left a little bit to be desired. Lowell had to organize his tackle while sitting on the floor. We had 9 guys at the Outing: Myself, Mike Thompson, Gordy, Gary P, Gary Ellis, Lowell, Art, Jim, and John Cummins. 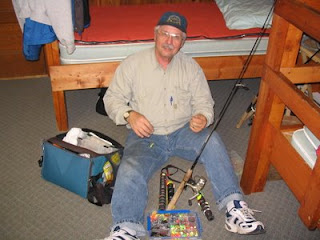 Mike "Cyberfish" Thompson and I elected to not get up at dawn. I headed out in front of the camp around 7AM but didn't get a bite before breakfast at 8AM. I don't remember for sure if Gary P. and Gordy caught a fish, but the other two boats came in skunked for the morning.

Cyberfish and I headed out after breakfast and fished around the Camp in Bear Trap. I think Cyb openned things up with a 10inch "Larry." I was throwing a small Fat Free Shad crank and connected with my 1st bass of the season but it only went 12.5". My crankbait got out of tune so I switched to a little bigger Fat Free Shad in citrus shad and I got another bass. 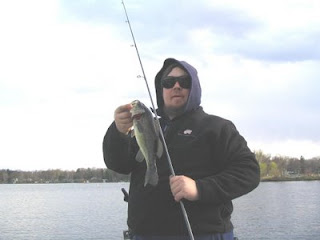 Mike got a 22 inch pike on the drop shot and a couple more small bass. Coming up on lunch time we ran across Jeff Bosshardt as he was headed to the camp for lunch. He and his partner only had a few small bass on cranks and he got those on the North end of Bear Trap by the break for the boat channel, basically what we were fishing.

After lunch it was slow and I got tired, so Mike dropped me off at the dock and I took a nap in the truck. While I was relaxing Mike just went out a little ways off the end of the West Camp dock and started blasting sunnies, crappies, and even a few largemouth (biggest 15.5"). Eventually I got up and fished off the dock, landing an under 10" bass on the Storm Wildeye Swimbait, unfortunately I didn't have my camera to take a dink picture for The Bassholes.com.

We had pizza for dinner at 5PM and the guys were pretty beat up from a rough day on the water. Winds were NW and around 20mph and it was in the low 60's and cloudy. Mike won the tournament easily thanks to the pike and crappies. I think Mike may have been the only one with more than 1 species of fish.

After dinner Mike and I started around camp and I got a couple of bass on an Outkast Money jig with a Cabela's Aqua Glow Hoochie Koochie Shad. The wind started calming down so we headed South on Bear Trap. We first went to the point with the bouy and Mike had a pike break him off. Next we went to a spot that has been productive for a variety of fish in the past. Mike caught a couple of crappies and I caught a dink bass on a Fat Free Shad. It started getting dark and I didn't have a way to hook up the stern light so we headed in.

Mike Thompson ended up getting "King Crappie" honors with a 10 incher.

I did a little fishing before brunch on Sunday off the camp dock. I missed a small pike on a bubblegum Zoom Super Fluke. Brunch was at 9:30AM and everybody but Mike and I headed home. Naturally Mike and I started fishing right by the camp. He got a crappie and sunfish, but we couldn't pick up any bass. Next we headed to the North end of Wapogasset and it was just dead up there despite the fact that water temps were 53-54. We fished up there for quite a while. Mike got a sunfish, crappie, and missed a nice sized bass and I got a small pike. The water was not warming up quickly and so we gave up on the North end before 2PM. We stopped at the YMCA camp to the North of the Culvert but nothing was in there so we headed back to the South end of Bear Trap. We fished that spot that has been productive in the past and Mike caught a few crappies, but just couldn't get dialed in and it was cool and windy, so around 3PM we headed back off the camp docks. Mike caught a small mess of crappies and sunfish which he kept. 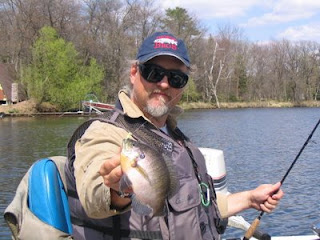 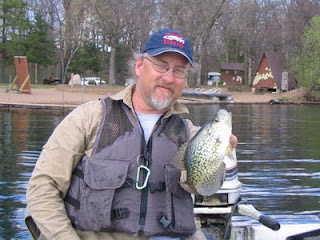 While we were anchored two loons came to visit (in the upper left corner is a loon beak and head just coming out of the water click pic to enlarge). 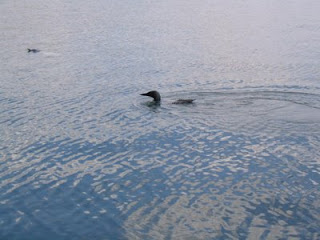 We fished until a little after 4PM but the bass just were not showing up, so we called it a day. We didn't land a single bass on Sunday.
Posted by Basspastor at 4:19 PM