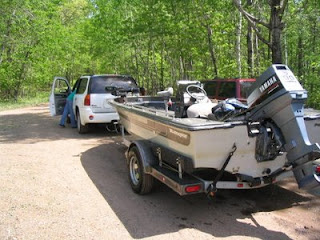 (The only picture I got was when we were off the lake, so you can see the rig I will be fishing tournament day.)

Today I prefished Cedar lake West of Aiken in Aiken County for my Baxter Bass Snatchers with my boater for the tournament Adam. Cedar is a lake with lots of bays, plenty of undeveloped shoreline and varying water clarity. Most of Cedar is deep water and medium depth weed flats are seemed to be almost non-existent. Most of the time we were either in fairly shallow water or on a steep break near shore. I think we are hitting this lake a little too early because of it's depth the grass is late blooming and so cover right now is pretty scarce or last years growth.

We covered a lot of water and saw more fish than we caught which isn't saying much. We saw quite a few crappies which looked like they were bedding, but very little bass bedding activity but there were some. The sunfish seemed to be scattered and not very abundant. I also saw quite a few pike and 1 muskie.

I caught 3 small keepers and 1 dink and 2 pike. I missed several strikes on the Zoom Super Fluke which I assume probably were pike because they were swirling on it and not hooking up which is rare for bass but common for pike. I caught all the keepers on a swim jig.

Assessment: If it is a good bass lake it didn't show it today, maybe if the grass was farther along that would make a big difference as there would be some good pad and reed area's and even a little rice. We did talk to a boat that was bass fishing that said the fishing on the lake was much better yesterday, so maybe the cold night pushed em back.

Since I got 3 keepers when we were covering and eliminating water I think there is a good chance I will get a limit, but size is a real concern.
Posted by Basspastor at 9:19 PM

When asked, fishing was always better yesterday. Or the only thing biting is bullheads.

I always ask people how the fishing is, but I never believe the answer. I guess I just like the conversation.