We had a pretty good rain storm this afternoon and I headed out fishing when it was over around 5:30PM and conditions were still overcast. I decided to make the GOMH my 1st stop and it was probably a good thing I did. John W. was there with his 2 girls and they were on the SW side, so I took the SE side. In short order I landed a 22", 19", 12" and 19" toothy bullheads on the black bladed black/chart DM Custom Baits Piranha. After a lull in the action I decided to move on.

At the Rock Dock I didn't have any success right away. When I arrived it was calm and the sun had come out, but that didn't last long. It clouded up and a West wind started up, still I didn't have any luck until I started twitching the orange/chart X-Rap. The first bite was this 25 inch pike. 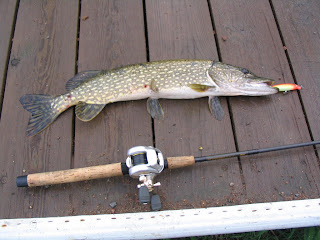 This pike fought like a 30+ inch fish going on several hard runs. About 5 minutes later I nailed a 19" pike on the same X-Rap.

I cycled through a few more lures and got my first bass on the Dead Stick Rogue that I bought on Ebay this Winter. 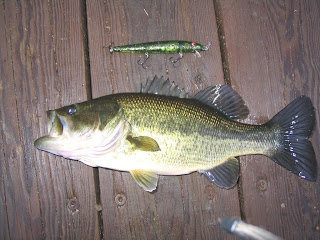 I tried for about 15 more minutes and then headed to Jenny's.

I didn't get a thing at Jenny's, so I headed to the GOMH. When I arrived at the GOMH there were no shore fisherman, but a boat was sitting close in on the SE side so I started on the SW side. While the boat was still there I got a jumpin bullhead on the black/chart DM Piranha. After the boat left I got one last toothy bullhead for the day and several more jumpin bullheads. The wind really started to blow and it was 50 degrees so I gave up a little earlier than usual.
Posted by Basspastor at 11:04 PM