Fish At Every Stop

Yesterday:
When I make several stops shore fishing, it isn't often that I catch a fish at every place I stop, but that happened today. Today's weather was sunny with light winds and temps in the low to mid 60's. I think I got out of the house around 6:30PM and my first stop was the GOMH. There were quite a few cars parked at the bridge but the SE shore was open. When I got out of the car, Grumpy Old Man Willard had a rod in his hand with a Dardevle on the end. He was happy that he was able to snag a stray line and get himself a bobber and lure. I took to fishing the SE side and was rewarded with 2 small jumpin bullheads on a silver DM Custom Baits Piranha. A guy who was on the SW side came over to the SE side and took up the area close to the channel, so I headed to the NE side and missed one bite there.

Next I was off to Bulldog where I sacked this hefty 16.75 inch largie. 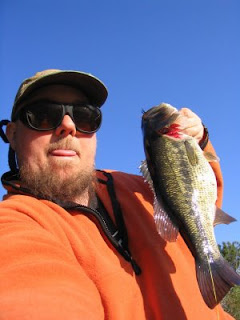 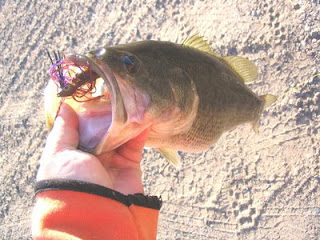 As you can see in the 2nd picture I caught it on a brown/purple Monsoor Swim Jig with brown grub trailer. I may have gotten one more bite, but I am not totally sure. If Bulldog gives any fish it is a bonus.

Next I headed to the Rock Dock where dinks were the order of the day. 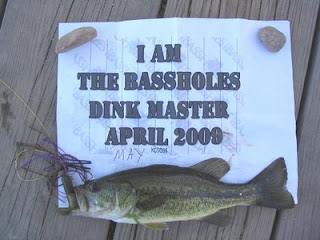 I got 3 little bass (1 brn/prl Monsoor Swim Jig, 1 orange/chart X-Rap, 1 silver Piranha). It was getting close to 8PM when a guy and a gal came by wanting to fish, so I let them have the dock. Apparently they had hit a few spots without much luck, he said he lost a big pike at Lake Shakopee.

Next I went to Jenny's and started by throwing the Monsoor Swim Jig. I had a solid hit but it got off. A few casts later I caught a small bass. On a long cast straight out I had another bite that didn't hook up. A few casts later and I caught this pike. 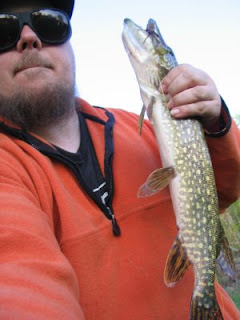 The pike nicked the line and when I went to get my scissors to retry I discovered my scissors were gone; I must have put the scissors on the car bumper when I tied on the Monsoor Jig at Rock Lake yesterday. I decided to take a few more casts then go back and see if I might be able to find the scissors. I was now throwing the silver DM Custom Baits Piranha and I had a fish nail it but get off. 5 bites at Jenny's is about as good as that little shore spot gets. After a couple more casts I went to find the scissors.

I didn't have any luck finding the scissors but the guy and girl were still at Rock Lake and I asked if he had a pair of scissors so I could retie. The nicked line was 30lb braid and the line cutter on my pliers won't cut braid. He did have some scissors and while I was retying he said he caught a keeper size crappie and they saw a couple others. The guy ended up giving me the scissors because he had several of them that he bought at the dollar store. I think leaving right away and letting them fish the dock might have been a factor in his generosity. I am so glad to have a replacement pair of scissors.

Since Jenny's was so productive I made the call to hit up the shore at my parents lake place on Platte Lake. It didn't take long throwing the Monsoor Swim Jig and I was battling with a good pike that jumped 3 feet into the air. I landed it and it was just short of 24 inches. A few casts later and I was hooked up with another pike that was at least as big, maybe an inch or two bigger. I got the pike most of the way in when I saw the jig was back in the pikes mouth. Sure enough it sawed me off before I could get it on shore. I made casts down to Jim's dock with the Piranha but didn't get any more action.

It was fairly dark when I arrived at the GOMH and I gave the Piranha a try on the SE side. I got 3 bites but didn't convert any of them. I decided to quick tie on another brn/prl Monsoor Swim Jig and tipped it with a pumpkin Zoom Speed Craw. I got a couple of hits on that but didn't connect with a fish. It was dark and after 9PM when I left.
Posted by Basspastor at 12:07 AM