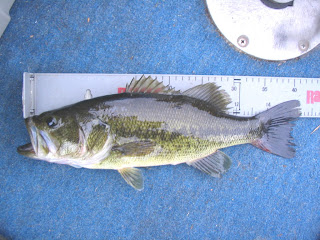 Today I got my first bass before I even left the dock. For some reason when I tied on a gold Berkley Frenzy Popper I decided to try it out even though there was a pretty good cross wind and chop at the dock. On about the 3rd cast it got smoked by a preggo 16" largie. I thought for sure it was going to be a pike when it first struck.

I got the boat started and headed to Sullivan Lake to fish the Platte River Mouth and the Sullivan Platte River Outlet (SPRO) area. The river mouth did give up a couple of bass on the Frenzy Popper and I think I missed a bigger fish in the river when the popper hung up on a lone lilly pad.

Next I worked the North SPRO which is a huge weed flat with wild rice, pads, cabbage, and a little curly leaf pond weed. The rice isn't to high or thick yet so I could get away with subsurface baits. Some of the shallow area's Pete and I caught fish in on Sat. didn't give up anything. I had to move off the bank. The most productive lures were a blue/black Outkast Swim Jig with junebug Zoom Speed Craw trailer and a black/chart DM Custom Baits Piranha chatterjig. The bass seemed to be scattered on the flat and I couldn't really tell if they were relating to anything particular. There was a surprising lack of pike as I only caught 2 in a full pass and 3/4. Once I got around the North corner at the end of the pads I moved in close to shore and got some fish on a Horny Toad in the calm stuff.

I went back for a second pass into the river going into it about 1/2 way to the dam. I picked up some 11-13" bass, no pike. From there I went onto the flat for 1 more pass. Towards the end of the pass I got the 16.50" which is pictured. It took the Outkast Swim Jig.

It was after 8PM when I headed back to Platte to fish the NW end of Channel Inn Bay. I started a little south of the NW cut and was rewarded with a fat 15.5" on a Herb's Dilly Buzzbait. I didn't get anything in the cut, but got a 16" on the Herb's Dilly at the start of the reeds on the point. The wind made fishing the old reeds difficult. I had a bite on a Monsoor Swim Jig and missed it. A couple of casts later I got hung up, I don't think a fish did it, and I was putting quite a bit of pressure on the line and my 30lb Powerpro broke. Not Happy! and that's how I ended the day.

Hey BP. Nice fish. How do you calculate the number of hits on your blogs?