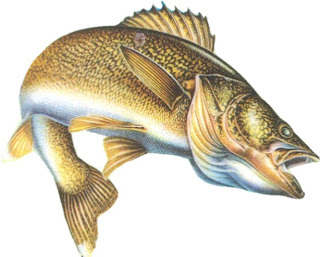 My trip to the Eddy's Jetti was not fruitless, but when I went to get the camera I found that I forgot to put it in the bag. Ohh Well.

When I arrived at Eddy's I was kind of glad about what I saw. The wind was coming into the Jetti with some pretty big waves and the sky was pretty much clear so there was a full moon. I arrived just before midnight so I got my stuff together and headed off to the South Jetti as the wind was supposed to be out of the North. I started by throwing Husky Jerks and was pleasantly surprised to find out the water is deep enough so I wasn't cranking in the rocks which has been a problem on the South Jetti for a couple of years. I cycled through some dark colors and the occasional backlash before I picked a clown HJ 12. Very 1st cast I smacked a 23inch Walter. Unfortunately that was all the action I would get for quite a while.

A guy came and fished next to me and hooked into what was probably a nice muskie or pike. I saw the fish break water but didn't get a good look at it. He was using 6lb line and it stole his brand new X-Rap.

I eventually gave the North Jetti a try but the wind limited casting distance. It was also curious that I was hitting rock with some of my stick baits. After about 20 minutes of nothing I went and talked with a guy fishing the North Channel. He was fishing with 2 lines and hadn't had a bite. He said they did well last year coming out at midnight off the North Jetti. So it was this guy and his buddies that kept me off the North side last year.

Eventually I went back to the South Jetti and caught a 22" on a clown X-Rap. I tried for a little while longer but it was pretty clear that it would be a slow slog between fish and I might not catch anymore. 2 fish in 3 hours was enough and I called it quits.

I fell asleep when I got home and woke up just before 7AM so I decided a quick trip to the GOMH was in order. I headed out with 3 rods but only used 2 of them rigged with a gold chatterjig (DM Custom Baits Piranha) and a Monsoor Swim Jig with a Zoom Speed Craw trailer. There were people on the SW and SE sides so I went to the NE side. I got a small jumpin bullhead on the first cast with the Piranha. I got a small jumpin bullhead on them 2nd Cast. I caught several jumpin bullheads and missed several strikes before I switched to the Swim Jig. I got a couple of jumpin bullheads on the swim jig, then had a fish demolish the Speed Claws. I didn't have any back up jig trailers with me, Oops. I kept throwing the swim jig anyway and was rewarded with a couple of jumpers and a 22 inch toother which will be dinner for some guy who was at the bridge. I also had a number of follow from an under 20" toother. I got 10 jumpers and the 1 toothy on the NE side.

The SE side openned up so I gave that a shot. The Piranha came up with nothing so I switched to the Swim Jig. I missed what I am guessing was a pike on a cast to the east bullrushes. A few minutes later I cast over the channel and let the jig sink to the bottom. I got a bite but lost it half way in. I cast back and got another hit, set the hook, nothing. Jigged a couple of times and got another bite, set the hook nothing. It turned out that the hook broke, bummer. At that point with no jigs or jig trailers with me I called it quits. 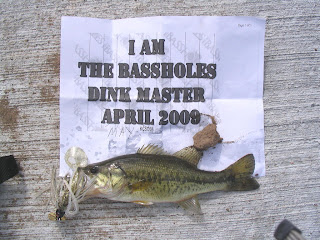 I went to the GOMH from 3:30 to 5:30PM. It was partly cloudy to cloudy with little wind. When I got there the SW and SE side were taken so I hit the NE side. I fished all along the NE shore and picked up several little bullheads including the Bassholes Dink picture fish on the gold DM Custom Baits Piranha or a Monsoor Swim Jig with Zoom Speed Craw trailer.

Next I went to the SE shore for a little while and missed a couple of bites. The SW shore opened up so I went over there. It was really slow. I got a couple of jumpin bullheads on an X-Rap. The group fishing the SE side caught a few silver bullheads. Eventually nature called and I had to leave. I think I got 8 jumpin bullheads total.

Bulldog: Stopped at the Bulldog access and caught a hammer handle on the gold DM Custom Baits Piranha.

Rock: Didn't get any bites. Talked to a boat that came off the lake and they got a couple small pike and some small sunfish. They said the fishing was slow and they didn't catch a single bass.

Jenny's and Lake Place Platte: Nothing