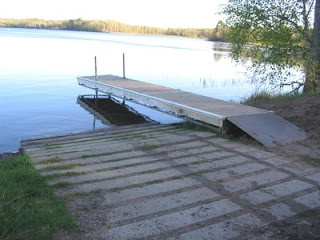 Tonight I took a picture of the Rock Dock cause I had a feeling I might get skunked. I think I headed out around 6:30 and my first stop was the GOMH. 3 Grumpy Old Men were in attendance and there were quite a few people fishing. The NE was open so I took that and I missed the only bite I got. By 7PM I was off to Bulldog for a quick stop with no luck, so per usual I next hit the Rock Dock.

I think I missed a bite right away on a brown/purple Monsoor Swim jig with brown grub. My next round of fan casting was done with a silver DM Custom Baits Piranha chatterjig and I got a bite from a little bass. I was going to take it's picture for the Bassholes May Dink Contest because it was even smaller than one I caught earlier this month. While I was going to get the picture sheet out of the camera case I was going to dip the little guy in the water and when I did that it got off, bummer. However, I was pleased not to be skunked even if it was a dink.

After a little while Grumpy Old Man Willard showed up. I had told him I was headed to the Rock access and he was hoping to get a pike from me. Apparently he had a close call with a guy and kid riding on an ATV, if Willard hadn't have been going fairly slowly he would have hit them. I put on the "secret weapon" orange/chart X-Rap but couldn't get a sniff. I cycled through several lures snagging a small sunfish on the watermelon Dead Stick Rogue that I caught the bass at Rock on yesterday. I was just about to give up with a last round of fan casting the brown/purple Monsoor Swim Jig when I had a solid hook up. It was a hard fighting pike and I got it most of the way into the dock when it took a hard run and got off. I went to tell Willard who was in his car that I just missed catching his supper. When I was talking with Willard I noticed that the jigs hook was no longer there. Sure enough this is the 2nd Monsoor Swim Jig hook I have had fail on me this week. The first time it happened the hooks wire looked clean, but this jig definitely had some rust issues. I will now do careful hook inspections on my Monsoor Swim Jigs when I use them in tournaments. I ended up trying a couple more things then split. Willard left shortly after I misse the pike.

Next I headed to Jenny's where I threw the silver DM Custom Baits Piranha. I got smacked 3 times with a swirl on one cast but didn't hook up. I threw right back to the area and hooked up with this 22 inch pike. 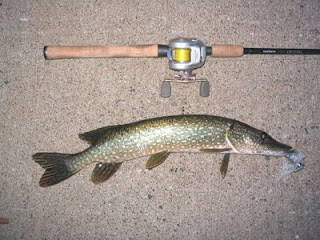 I did end the day at the GOMH and Scott and John W. were there. Apparently they were going to try for golden bullheads after dark. It was pretty dark when I got there and I only got 1 small jumpin bullhead on the Piranha.
Posted by Basspastor at 11:50 PM