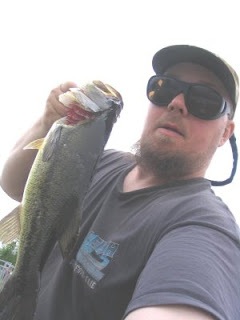 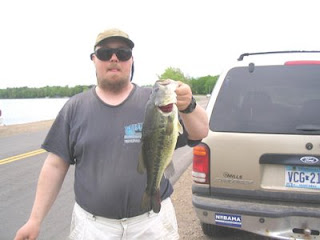 Tomorrow I have my first Baxter Bass Snatcher Tournament of the year, so I took a short trip this morning and then spent the rest of the morning into noon organizing my tackle to be ready to go for tomorrow. I got it in my head that I would take a trip to the GOMH tonight to see if I might be able to catch a few bullheads. A little before 5PM I noticed on the weather map that it looked like showers were closing in and I thought I better get going before the rain hits, it never did rain. I grabbed a couple of rods I will not use tomorrow along with having my rods and tackle for tomorrow in the truck.

When I arrived at the GOMH, Grumpy Old Man Lewis was there and he wasn't fishing as usual. I set up on the SE side (Sullivan Lake) with the Lost Jig and a white 3/16 Strike King spinnerbait. The wind was coming in out of the SW pretty good and current was flowing at a good clip North into Platte Lake. It wasn't long and I had my first bullhead on the Lost Jig. I followed that with several more than switched to the spinnerbait and caught a couple more, then I switched back to the Lost Jig and got a couple more then things died down, so I decided to switch to the NE side (Platte Lake). I think I had 7 jumpin bullheads at this point. As I was walking up to the road Grumpy Old Man Willard showed up. Once on the NE side I immediately started catching more bullheads on the Lost Jig. After that action slowed I switched to the spinnerbait. It wasn't long and I was up to 20 jumpin bullheads and I decided since they were going pretty good, I would try a gold Berkley Frenzy Popper. The jumpin bullheads were on that like white on rice. I was getting a hit basically every cast and I got a couple of Derby Fish (17.50"1st picture& 17.25"). Most of the fish were 12"-14" with an occasional smaller, but nothing in the 15 & 16 inch range. At some point the current switched directions and started flowing into Sullivan, the bite just kept on going. I was having a blast, I landed close to 30 fish on the popper and had numerous blow up misses. Eventually things slowed on the popper, so I went back to the Lost Jig and landed another Derby fish (17.50" 2nd picture) but things were slowing down. I got the bright idea to go to the truck and try out some of the stuff I will be throwing tomorrow. I got a couple of jumpin bullheads on the first thing I tried, then 3 boats came through and the action just stopped. I gave the SW side a shot and caught 2 small toothy bullheads on a blue Brovarney Swim Jig with junebug Zoom Speed Craw trailer. By 8PM I couldn't buy a bite and left.

I caught at least 57 jumpin bullheads and 3 toothy bullheads. It was AWWWWWWWWWWWN!!!

I think there is zero chance I would have done anything close to what I did if I had been in the boat tonight.
Posted by Basspastor at 10:00 PM

Nice fishing for a quickie. Good luck in the tournament.
Tight lines