Today was windy, cloudy, and cool so I didn't go to the lake. Tommorrow is suppose to be much nicer so I will probably get out.

This morning I woke up early to put a Ebay bid on a pair of St. Croix rods that were for sale. I discovered the auction last night and thought I had a real possibility of getting a good deal. I am currently considering buying a 7' MH or H rod and these rods were both 7' MH, one X-fast, one moderate action. The thing about it was they were custom made rods built on SCIII blanks (Avid), so I wasn't real sure what the value was compared to a factory built Avid. I'm guessing they are of slightly less value than a factory Avid. Anyway I was quickly disappointed to discover that these rods had not gone through unnoticed and there was a small group of bidders slowly bidding the rods up. I wasn't going to play that stupid game and so I waited to snipe in the last few seconds. By the time it came to bid the rods were actually about $10 more than I really wanted to pay for them, but I still thought they were probably at a bargin price, so I put in a bid for $15 more than I really wanted to pay. Well that didn't end up being enough, but it was the 2nd highest bid made, which kind of tells me these rods went for about what they were really worth and were not a total steal.

In the Mail today: 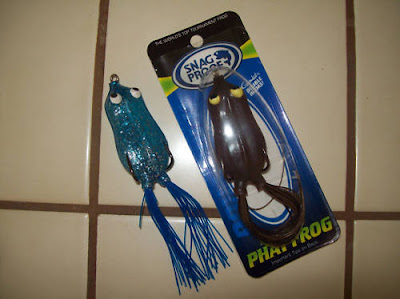 The 2 Snagproof Ish Phat Frog's that I won on Ebay for $10 shipped. The colors are "Iced Out" blue and "Buck Nasty" brown. The reviews I've read on these frogs have all been positive. Will probably be throwing them tomorrow.
Posted by Basspastor at 10:40 PM

Great Blog. I stumbled upon it today. I will be visiting regularly.

You will love the Phat Frogs. Buck Nasty is my favorite frog right now.