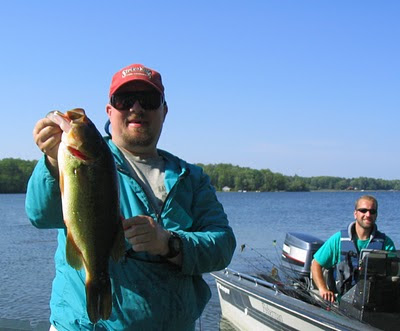 Note-Washburn Lake is made up of 3 distinct basins (West, North, East)

Conditions for the day would be a little hazy for about the first hour giving way to sun and wind 12-20MPH out of the S or SW.

A number of our guys were none too pleased with the welcoming committee at the public access. Basically, a number of people from the Washburn Lake Association wanted to make sure we weren't bringing any exotic species to their lake. The lake already has Milfoil in it. Apparently, they also quizzed some of our guys about what lakes they have had their boats in recently.

We blasted off around 10 to 8AM from the Public Access on the South end of the East basin. My boater Darren and I headed North to a large rice and pad bed in the East basin. The wind was blowing close to 10mph at this point. I quickly switched from a white Spro Bronzeye Frog to a white Zoom Horny Toad because the slop wasn't the thickest stuff in the world and there were lots of open pockets. About 15 minutes into the day I landed a 13.75" largie. About 2 minutes later I had a blow-up that didn't get the Toad. I cast right back to the area and let the Horny Toad sink in a whole and sure enough, it got picked up and I put a 14.75" in the boat. Right after that, my partner Darren missed a blow-up on his black Spro Frog. At one point we worked our way down a lane in the weeds towards a beaver hut. I made a cast to the South into another open lane in the weeds and had a good blow up that didn't hook up. I cast back to the spot and got a good backlash. Right as I got done pulling out the backlash I realized a fish was running with the Toad. I set the hook and landed a 11.5" which was a short fish (12" minimum length). We kind of got stuck for a couple of minutes but eventually were able to get away from the beaver hut. We worked out way down a trail in the weeds but it was super shallow and we didn't get nothing.

Next, we headed off to some docks in the channel between the West and North basins where my boater had success in pre-fish. We were between docks where there were reeds and pads when Darren said he had a bite. At the time I was throwing a texas rigged junebug Crawtube out into the lake. I switched directions and started pitching the Crawtube into the pads. Sure enough, I had a pickup and I brought in a 15.5". We kept working down the shore and I started throwing a white Strike King Burner spinnerbait out into the lake. I got a hit and brought in a 12.75" bass. Eventually, we worked our way into a little bay. When we didn't get anything there we headed out to work a rock pile in the West basin.  I started out throwing the spinnerbait and had a couple of hits that didn't hook up. Eventually, I got a very small pike. When we got on the backside of the rock pile where Darren had gotten a couple of bites in pre-fish. I switched up to the Crawtube. Darren caught a rock bass, then I caught a pike. We worked the area good, but no bass.

Next, we headed to go hit a fallen tree where Darren got a good bass in pre-fish. We actually started a little North of the tree at the first dock on that side of the bay. There were good looking emergent and submerged weeds here and I got hit right by the boat on the spinnerbait by what I'm guessing was a little pike. We got to the tree and Darren got the first crack at it. Eventually, I started pitching a black/blue Crawtube to the tree and on about the 3rd pitch I had a fish nail it. I set the hook and it was a good one.  18.5" and it would go 4lbs even. We kept working down the shoreline and I got a little pike. We were not getting any bites, so we headed to the other side of the bay to work the weedline and docks where Darren had gotten a number of bass in pre-fish. I pulled a couple of pike off the reeds weedline transition and then we got into fishing docks. On about the 6th dock I had a bad skip that went through and then under the dock. Sure enough, a fish picked up my Zoom Super Fluke. I set the hook, but being that my line was over part of the underside of the dock I didn't get a good set and the fish came up and got off. I ended up hanging on the dock, so we had to go get me un-hung. That would be the only bite we would get on a dock. We did fish several more docks and then we decided to make a move to another rock pile.

I started throwing a Mann's Baby Minus One and got a little dink of a pike. Next, I tried some topwater, then I switched up to a mushroom jig with a wacky rigged Zoom Z-Nail. I had a pike steal my jig. We worked this area hard as my Ace in the Hole said this was his favorite rock pile, but we came up empty.

Next, we headed off to find a dock that was recommended. I am not sure we found the right dock. It was about 1PM and Darren informed me that the trolling motor was losing power. We fished a little pad filled bay that was out of the wind. It looked awesome but there weren't any fish.

Next, we headed to the slop in the NW corner of the West Basin. It was a challenge working in this stuff with a dying trolling motor but at first, the wind actually helped us a little bit. I was fishing with an albino Spro Bronzeye and I had a fish just bump the lure in the duckweed. I cast back to the spot and very slowly worked the frog. Sure enough, it took it and I landed my limit fish, which was 14.5". The wind was starting to be our enemy and Darren missed a good blow-up on his black Spro. Right after that I had a blow-up and landed a 14.25". At this point, Darren was really struggling with the wind and we almost got stuck in the junk.

Basically, we were not sure what to do next so we headed to the SE end of the lake and just started a controlled drift down the East side of the West Lake. I got a couple of pike on the spinnerbait, I switched up to a white Pointer 100 but couldn't get bit on that, so I switched to a black/blue Strike King Pure Poison chatter jig. I got a couple of pike on that. Darren caught a couple of pike on a spinnerbait. I had a big pike hit but not hook up on the Burner spinnerbait. With about 1/2 an hour left we decided to head back and try the shallow pads by the access. I did get a hit on my Spro, but I think it was something small. And that was it.

Results:
As I wrote before my big one was 4lbs even and my bag went 12lbs 13ozs and was good for 4th Place, which equals my best showing of last year and this ties for my 2nd best result in the club. My poor partner Darren got skunked. The Tournament was won by Nate Steinbauer with 14lbs 11ozs and big bass was 4lbs 6ozs. I believe 1 smallmouth was weighed and a couple of guys caught them in practice.

Analysis: I fished clean other than missing that one at the dock. If we had not lost trolling motor power I think I would have probably done even better. Unfortunately, the bass just didn't seem to be chasing on the weedline and flats and that drifting in the wind was totally unproductive. How I wish we had made a move to a pad area my Ace in Hole informed me about. This spot was out of the wind and on our way in we watched one of our boats pull a good fish from the spot and they got another good one right after that.

I want to say a BIG THANKS to my "Ace in the Hole" Bob Downey* of B3 blog for giving me excellent info about the lake.

Next Tournament: Serpent Lake (With a very good showing at Serpent I could move into the coveted Club Top 6 for the year. Currently I am in 8th, which is the highest I've ever been ranked)