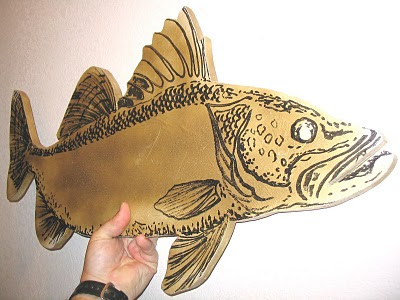 On Friday it was cold very windy and wet in the morning. Nobody wanted to go out in it. Around 1PM it dried up, still overcast, and I was willing to go out but nobody with a boat wanted too.

On Saturday I fished with Gary Pflipsen on Mule Lake. Conditions were clear, then cloudy, then clear again with little to no wind and it got warm enough that I fished for about 3 hours in a T-shirt.

When Gary and I arrived we motored a fair ways North of the access and started fishing the West shoreline. I got the first fish which was this largemouth. 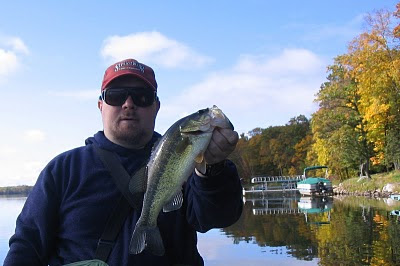 It bit on a green pumpkin Strike King Pro Model tube on a leadhead jig. Gary got then next bass which was a 15+ largie caught off a dock. I got another decent bass on the tube. I was missing a few bites.

In the calm and overcast I started throwing topwater and I caught an 18" pike on a Lucky Craft Gunfish. Gary caught a nice mid 20" pike off a dock with a Senko. Finally we got down to the Narrows and on the North point I got largies number 3 & 4 on a PB&J Yum Wooly Bug. 4 Bass was the limit for bass in the FallEE WallEE Tournament. I believe bass #4 was 15" and my biggest of the day. To the East of the narrows we started seeing a lot of baitfish activity on the surface so I started throwing topwater. I got an 8" largie on a clear bluegill Deps Buzzjet Jr. I put on a motor oil Yum Wooly Bug and caught my second pike which was a meager 14 inches long. 2 was the tournament limit on pike and it was this fish that won me the top spot for 2010 on FallEE WallEE. I caught one more 11" largie on the bluegill Deps Buzzjet Jr. and a 12" largie off a dock on the Strike King tube.

When the sun came out in the afternoon the fishing got tough and I didn't catch any more fish.

As it turns out fishing was kind of tough on everybody. Several of the guys had their 4 bass, but didn't get their limit of pike. Because of this and Gary Pflipsen and Mike Thompson not participating in the tournament I won the top spot on FallEE WallEE. Gordy got second and Jim Druk got 3rd. Gordy was fishing out of his new boat on Boy Lake and Jim got his fish on Three Island Lake fishing with minnows.
Posted by Basspastor at 2:08 PM