Tonight I got out from about 6PM until dark around 7:30PM. Today was near 70 degrees with a 10MPH W NW wind. The wind steadily diminished and was non-existent by 7PM.

I headed out to the Big West Bay (Platte Public Access Bay) and planned to fish water that I caught 3 fish on Tuesday Night. I started quite a ways West of the area I got the fish and drifted with the wind along the sparse but definite rice edge. Right away I missed a hit from what I think was a small pike. I threw a Herb's Dilly, Buzzjet Jr., Repo Man, Texas rigged Yum Wooly Bug, and a spinnerbait. Nothing was happening and there was very little surface activity, whereas on Tuesday night there was a fair amount. 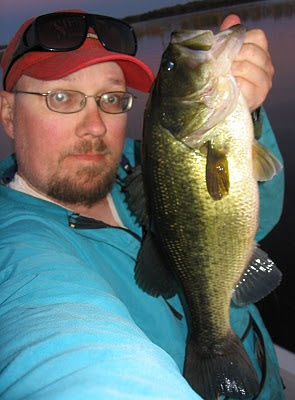