I headed out the door a little after 3PM and dropped off a fish fillet for Jenny. Naturally I hit up Jenny's from shore, but couldn't get bit on the Mad Maxx frog. So off I went to get the boat ready. I fished the area around the dock with a Mad Maxx and didn't have any hits. I got the boat loaded and went to start the motor. It was turning over but not starting. After a couple of minutes of this I sat back to reflect and realised I didn't have the kill switch attached. Put it on and the motor started right up, amazing. 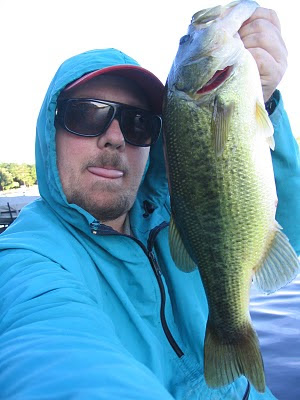 A couple of docks down I made a good skip cast under a dock and boat lift. I felt something pulling on the Fluke and I set into a fish, which turned out to be this 8+" pumpkinseed, which I kept. 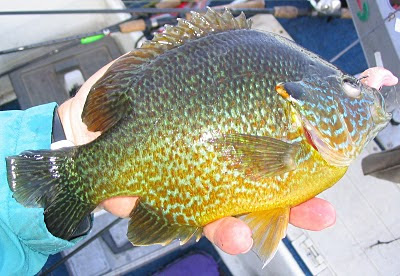 Note: The kept fish went to my parents renter John who likes to eat bass.
Posted by Basspastor at 11:45 PM