Today I got out from about 4 to 7:15PM. Air temps were in the low 60's with sun and it was pretty much calm until about 7PM when a 5MPH wind came up out of the E SE.

All my equipment was at the lake, so I didn't fish Jenny's. Off the dock I had a strike in the exact same spot I got a pike yesterday, but the fish didn't hook up and didn't go after any follow up casts.

I headed out in the boat and my first stop was at the reed bed off the North point of Channel Inn Bay. There was some activity off the deep edge of the reeds, so I started there. I had a nice bass come completely out of the water as it hit the green/yellow Herb's Dilly Buzzbait but it didn't hook up. I was seeing some activity off the reeds on the weed flat so I went that way. My first fish was a 14.25" largie on the Herb's Dilly. I also got a pike out there on a bluegill Deps Buzzjet Jr. Eventually I got back to the reeds and in closer to shore where it looked awesome but there were not any fish. I started working North and picked a 11.75" largie from open shoreline by where a dock used to sit. I kept working around the point to the west. This water was now shaded and the docks were worthless. I did get a couple of hits between docks on the Buzzjet Jr. but the fish didn't hook up.

Eventually I decided to motor farther West to some docks that have historically been better; They weren't. I decided to go deeper onto the flat into some reeds. I started seeing some activity. I had a 15" largie jump all over the Buzzjet Jr. in the sparse reeds. I worked west to where there were the remains of a rice bed. I nailed a 18.25" largie just before the sparse rice. 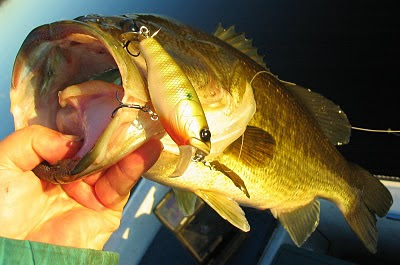 I did work into the rice edge with the Herb's Dilly but didn't get bit.

I decided to motor back to the weed flat reeds. The wind had come up at this point. I was throwing my new jet black Buzzjet and had a pike come out of the water after it but not hook up. Eventually I switched to the Paycheck Baits Repo Man and I got a 13.25" largie and a small pike on that. It was getting dark and the fish seemed to shut down so I headed in.
Posted by Basspastor at 9:09 PM