About An Hours Worth

Today I fished for about an hour maybe a little more.

Conditions were overcast with a bit of drizzle and 10MPH winds out of the E SE.

First stop was at Jenny's, nothing.

Next I went to the lake to get the boat. Fished around the dock first with a white Sizmic Toad and didn't get any hits. Got the boat ready to go, only bringing 4 rods. 2x Ish Phat Frog's, 1 Sizmic Toad, and Fin-Tech Title Shot Jig with wht/red Strike King Bleeding Bait Flippen Tube.

I didn't fire up the big motor and just started moving East fishing into the wind. I basically worked my way far enough to know, nothing was happening in this slop. So I decided to head across the bay to the reeds where I missed the big one last night.

I was hoping the wind was more out of the NE so this area would be a little protected, but the SE direction meant I would quickly get pushed right into the reeds. As I was drifting through the weeds in the area I missed the big one last night, I had a fish swirl on the "Iced Out" blue Ish's Phat Frog. This happened really close to the boat, so I followed up with the tube and think it got swiped at by a pike. I continued to drift through the reeds and had a small pike come flying out of the water after "Iced Out". On probably the next cast a fish boiled about 10 feet in front of the boat. I was kind of out of the wind at this point and pretty stationary. I followed up a couple of times with the frog, then the tube. I thought the tube got picked up and I set the hook, nothing. I re-rigged the tube and cast it back. Sure enough it got picked up and this time I hooked the fish and landed a 15.25" largie. I worked the area hard and had one more blow up that didn't get the Phat Frog. The follow up with the tube didn't produce this time, so I think it was probably a pike.

It was getting to be time to leave (Vikings Game) and I decided to go on the inside edge of the reeds to leave. There was a dock there that I decided to fish. I skipped the "Buck Nasty" (brown) Ish's Phat Frog well under the dock and sure enough I heard it get attacked. I set the hook and landed this nice 16". 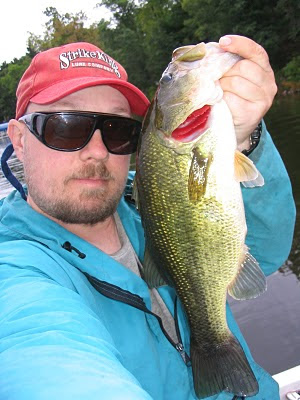 1 consider myself 1 for 2 on catch to stike with the Ish Phat Frog.
Posted by Basspastor at 11:45 PM