Today I was out on Platte Lake from about 2PM to 6:15PM

Conditions were overcast with W NW wind blowing 8 to 18MPH

My first stop was Jenny's from shore and I had a hit on a Sizmic Toad almost up on shore. I didn't set the hook, so I don't know if it was a bass or pike.

Next I headed to the lake place and got the boat ready. I decided with the West wind to just drift the slop to the East of our lake place. Two docks down I got a 13.75" bass on the white Sizmic Toad. As I rounded the corner I had something big follow the Toad to the boat. I wasn't paying attention and didn't realise something was up until there was a big boil just after I pulled the Toad out of the water.

I decided to try a Herb's Dilly buzzbait and I had a couple of strikes right away that didn't hook up. Then I caught 14", 15", and a 15.25" and a pike. The fish definitely wanted that buzzbait. I missed a couple of more strikes. I worked my way out of the slop, then decided to go right back into a boat lane. I made a good cast into an open area in some thick stuff and was rewarded with a 15.5" largie. I had a swirl and I cast back with a Title Shot Jig with white/red Strike King Bleeding Bait Flippen Tube. The fish nailed it, but I missed the hook set. I cast back in and it got picked up, but I missed it again and it was gone. I worked the area with the Dilly. As I was ripping it out of the weeds I had a Norman Speed Clip malfunction and the Dilly disappeared. I got right to the spot, but the water was just to weedy, murky, and deep for me to get it back. Stupid mistake on my part not tying direct as soon as it was clear the fish were on the Dilly. As far as I know the Herb's Dilly with a normal buzzbait blade are not made anymore and losing one totally sucks. Fortunately I have several I picked up on Ebay and I just put on another one in the exact same color, green with yellow skirt.

It was about 4PM and I decided to make a move to the North end of the big West bay across from the Public Access on Platte. Right away I was rewarded with a 14" and 13.75" bass on a Snagproof "Buck Nasty" (brown) Ish's Phat Frog. I had a fish follow the Dilly out from the bullrushes. I cast back at the follow with the Strike King Tube and the fish hit. It was about a 23" pike. I worked my way around the bullrushes. I was casting towards the last patch of rushes that are out from shore when the water erupted on the Dilly. I knew it was a good one immediately. It stayed hooked up and I landed this 19.5" which was just under 5lbs. 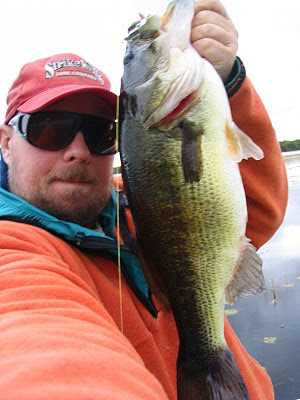 I had a couple more good opportunities with the Dilly. One I think was a big pike but I couldn't hook up or they just boiled on it. My final fish was a Pike on the Sizmic Toad.

As I headed out of the junk I decided to throw my new Lunker Punker on the edge of the maidencaine. Can't say I'm real impressed with the thing, but I did have a small pike swirl on it.

Hey Bass Pundit i live in Canada,windsor ontario next to Detroit, my question is where can i find the herbs dilly,i have about 4 of them that i bought 20 years ago one is the frog green one,i am looking to buy more but cant find them can you help,reply to chaywood12@hotmail.com thanks Cliff or text 519 9950786 thanks,nice fish....