In anticipation of the rain we are suppose to be getting, Dad and I pulled the dock up on to shore about 8 feet, so it won't be underwater. We got done with that around 2PM and I went out fishing.

Conditions: Overcast with a 8-12MPH East wind. At times it seemed like it was more SE and at other times more NE.

I started fishing across the bay in the reeds where I missed a big fish a little over a week ago. The reeds were dead and I don't think I even had a hit.

Next I went to a slop patch on the North End of the big middle bay. I was throwing the same Herb's Dilly buzzbait as yesterday, when it got plastered by a good one. 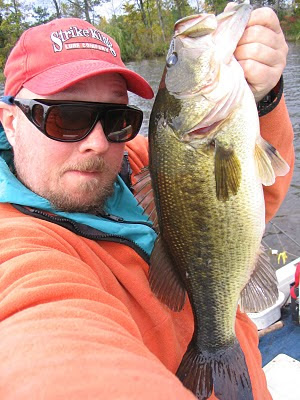 Down the way a little bit I got a 13.5" close to a dock on the Dilly. I worked down to the last slop patch which is basically nothing but a few pads at this point.

Next I moved all the way around the point to the NE bay where it was calm. There was some activity in this spot but all I could raise was pike. I didn't catch any. I made a move to fish the entrance to the North middle bay. I got a 13.5" on the Dilly along some bullrushes by shore and got a 14" on the Dilly in some rice with reeds. Fished some good looking pads and rice but nothing was going. On the back side of the maidencaine I got a little pike. Next I moved to where I got the big one yesterday but the whole area was totally dead, not even a pike strike. I decided to call it a day a little after 5PM
Posted by Basspastor at 9:21 PM