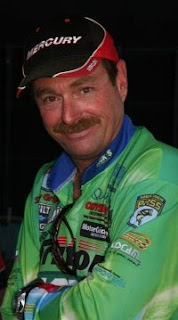 Well the veteran legendary Florida sight fishermen Shaw Grigsby, pulled out yet another sight fishing victory in Florida. Shaw was kind of lucky because he beat Grant Goldbeck by 7-6 with Grant weighing in a full 5 fish less than Shaw. It was an increadible comeback for Grant with just 1 fish for 1lb 1oz on Day 1. Personally I was hoping Grant would somehow pull it off and he was just one toad away from doing that today. I think I along with a lot of Elite Series anglers are astounded that sight fishing was the deal in this one, especially with the winning area being shared by 3 or more boats. I guess it just goes to show how unpredictable fishing can be at times.

One thing about Shaw, I like the way his Jersey looks in the abstract and the hoodie that I am having designed is going to be quite similar in terms of the color scheme and design.

In terms of Angler of the Year race you have to believe that KVD is licking his chops. And Props to JVD in finishing 1 spot below his Uncle in 5th. If you missed the weigh in today Jonathon Van Dam was moved to tears when talking about how this was his dream come true.

My B.A.S.S. Fantasy Team was brutal in this one with 3 anglers worse than 77th Place. I faired much better in Advanced Anglers.com because I put KVD and Scroggins on that team. David Walker and Bobby Lane were major buzz kills on both. While my Fantasy Fishing teams have kind of sucked it up this year I am still ahead of the game in terms of prizes won thanks to a contests with The Bassholes.com, Chris Lane on Facebook, and TBrinks Fishing blog. Hopefully I'll pull down some Fantasy Fishing prizes yet, the season is still early.

Update: Here is a nice write up on Shaw from Wired2Fish.
Posted by Basspastor at 5:25 PM