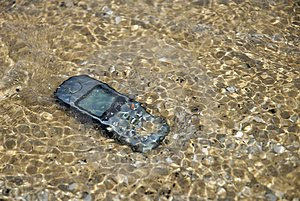 The week the Outdoor Blogger Network has a writing prompt titled Damaged Goods. Here is the idea:

If you have broke, damaged, or set on fire a favorite piece of outdoor gear we want to hear your story!

I have a few stories, which I will do in multiple posts.

Can you guess what this first story is about?

For about 10 years in a row from the mid-90's to the mid-2000's I made the trek down to SE WI to fish the Fall salmon run. I would go in early to mid October to fish the Root River in Racine and the Pike River in Kenosha. One of the places I fished was Lake Michigan where the Pike River flowed into the lake. Sometimes the wave action from Lake Michigan would close up the river mouth with sand; The river comes out at a beach. To get fish you need the river flowing into the lake. The first time I witnessed the phenomenon of the river being closed up by sand, I had the bright idea to try to do something about it. I went and got a 5 gallon bucket from the car and set about making a channel from the river to the lake. The idea was to get some water to start to flow, which would naturally cause erosion in the sand making a wider channel until eventually the river would be flowing into the lake, which would bring the fish in close. Well the plan worked and once I got the channel made water was soon flowing quickly from the river into the lake. I kept working to expand the channel and the flow got better and better. One time when I bent down to scoop some sand while I was in the middle the channel my cell phone popped out of the pouch on my waders. At this point the river flow was such that the cell phone was instantly swept away from me right into the lake. Just like that it was gone. I couldn't believe it. As the Z-Train would say, "train wreck."
Posted by Basspastor at 12:07 PM

I hate that when that happens!!!

Last year I was sitting in the boat dockside while my wife was sitting on the dock wearing a hoodie. She used to have this habit of keeping her phone in the front pocket. I cast out a waxie and then heard a splash followed quickly by the uncensored version of "Crap."

lol We spent the next hour dredging between the lift and the dock with a net but we got the phone back, and amazingly enough, it still worked after we dried it out.

Good fishing moves on your part, sadly, ouch to the cell phone! At this point, my cell has never taken a dive into the water while I'm out (racing to knock on wood now) and it's little stories like this that remind me to keep it locked up tight.

Thank you for sharing!
Rebecca

It’s always disappointing when something bad and unexpected happens just when you’re starting to have fun already. I hope it didn’t ruin your day of fishing. Maybe you can just leave your phone somewhere safe and far from the water next time. :)
{Melanie Daryl}