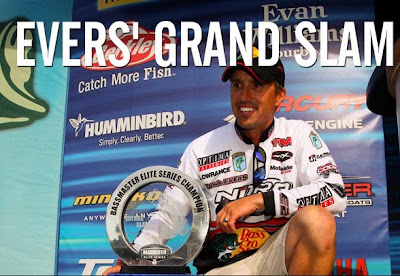 (Photo-Screen Capture from Bassmaster.com)
This one was close folks. The Citrus Slam Elite Series Tournament on the St. Johns River was suppose to be an epic slugfest. It didn't live up to the hype because loads of big fish disappeared on Day 1 and the promised 30lb bags never materialised. I have a theory that the "Super Moon" caused the fish to feel that the moon was full almost a week early. That would explain why the fish were moving up despite a cold front last week at Harris Chain and why many of the Pro's reported seeing the mother load in practice.

With the fishing being tougher than expected the door swung wide open for The Big Show Terry Scroggins to take home the title on his home water, and that almost happened. Unfortunately Big Show suffered through a series of execution issues on Day 3 due to light line and he came in light with only 13-15. That stumble opened the door for Edwin Evers and he stepped through it squeaking out a 2-14 win with 77-1. I am guessing Big Show is just sick that he didn't put up at least 80.

Congratulations Edwin, you earned this one BIG TIME!

You can give Edwin props at his Facebook Page...

There is a good post win interview with Edwin on BassFIRST.
Posted by Basspastor at 5:12 PM