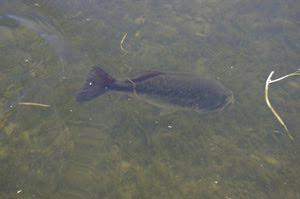 If you spend anytime on the Internet in the Spring on fishing related websites where people are allowed to share their opinion, you are bound to come across those that are opposed to fishing for bass on their spawning beds. Over and over people spout the same duel criticisms/opinions; Bed fishing is detrimental to the resource and bed sight fishing isn't a sporting method by which to catch a fish.

I don't want to get into the resource issue here, but focus on the criticism of bed fishing being an unsportsmanlike way of fishing. The notion that bed fishing bass is unsportsmanlike usually stems from what I'll call the shooting fish in a barrel theory. The shooting fish in a barrel theory is predicated on the belief that catching bedded bass which you can see is easy and takes no skill whatsoever to do. When it comes to smallmouth bass this may or may not be true, but when it comes to largemouth bass it is an outright myth.

Now I will not dispute that catching some percentage of the bedded largemouth bass one sees visually may be easy. But really this is no different than fishing at any other time. A long time ago In-Fishermen theorized that the fish you encounter on the water will either be positive, neutral, or negative in attitude.
When fish are active and in a positive feeding mood, they respond to many baits and methods. Fish in a neutral mood are not actively feeding but can be tempted with a more selective approach. Fish in a -negative mood generally don’t feed and are spooky, jittery, and difficult to catch.
Depending upon the time you come across it a bedding largemouth can be in any one of these three states. In the just completed B.A.S.S. tournament on the St. John's River in Florida angler after after angler talked about how spooky many of the fish were. The anglers talked about how some fish were caught right away, some fish needed quite a bit of coaxing, and some fish ended up being nothing but a big waste of there precious tournament time.

Other skills required by sight fishermen may include the ability to make oneself as stealthy as possible, being able to cast accurately with a quiet presentation, being able to spot a fish or bed in the first place, and being able to coax a fish into a more positive biting mood.

Personally, I don't sight fish for bedding bass very often because I don't seem to come across very many bass on beds. In the rare cases that I do, I don't consider myself to be very good at it because I am not experienced in recognizing a neutral from a negative fish. If I have to take the time to work a fish I almost never am able to catch it. I know first hand from trying it that catching a bedded largemouth bass can be anything but easy.

I think there is one more line of complaint by those that say sight fishing for bedding bass is unsportsmanlike, but I just regard this one as absurd. Basically some people seem to believe if you can see a fish then fishing for it is somehow unfair and unsportsmanlike. Are hunters unsportsmanlike because they see what it is they are shooting? Or they take their shot at close range? Fishermen are basically hunters of fish, why should the ethics be any different?

Update: Alton Jones talking sight fishing, many of my points come into play...
Posted by Basspastor at 5:08 PM

I agree completely...it's not as easy at it looks sometimes. Also agree with your analogy to hunting..very true

I also agree, if you can see them, chances are they can see you as well. its still fun though.

Your analogy to hunting is a good one. However, I don't think the unsportsmanlike criticism comes from being able to see the fish. I think it's that you're praying on protection instincts vs trying to trick the fish into eating.

That's interesting I can't say I've heard anyone who was against bed fishing articulate that it isn't sporting because it's "preying on protection instincts." If anything I would think that would make it more sporting because a bass that is in full on protection mode is less apt to injest an intruder than try to intimidate it. Bedding bass are often not hooked because they don't injest a lure, but only pick up a little piece in an attempt to move it.

Funny, I just did a post on this. Basspastor, I couldn't agree with you more. I think it's easier to get a fish to bite because they're hungry than because they're protection/nesting. You really got to have patience and stealthness. Def like hunting. Right on Dave! Nice post!