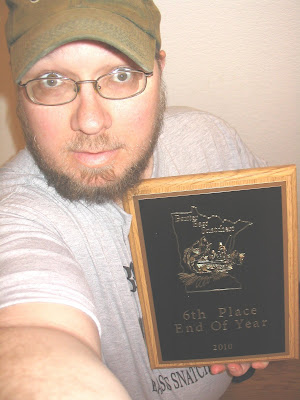 This is me with my Baxter Bass Snatchers Club 6th Place in Angler of the Year plaque. Plaques go to the top 6 places because 6 guys traditionally make the State Championship team. Basically I would not have gotten 6th Place if a couple of the clubs best sticks didn't miss several tournaments a piece. I had 151 points for the year, which normally is only good enough for 9th or 10th place. It was my best year by 9 points, which means per tournament I finished almost 2 places better on average than in 2009 which was my previous best year in points.

If you go by points/place of finish it would seem I'm improving, but when it comes to the fish being caught there is another picture. Here are my 3 years in the club by number of keepers weighed, total weight caught for season, and average weight of fish weighed. Note- 6 tournaments with a 6 fish limit.

I regard my rookie year as my best year in the club fishing wise.
Posted by Basspastor at 6:31 PM