Last night I didn't get on the water until 6PM. For weather we had a pretty good rain around Noon then sprinkles and by the time I got out on the lake it was sunny and calm. I decided I was going to give Sullivan another go. Once again I stopped to fish right by the bridge as I went into Sullivan Lake, but I didn't get anything. I proceeded to fish South on the East side of the channel from the bridge all the way up to the intersection. I basically had one hit, that I missed in real close to the boat. Not sure if it was a bass or pike.

Next I headed to the SW side of the intersection to fish where I got my two big fish yesterday. In close to the bullrushes I had a pike bite off my white Spro Frog which I was able to retrieve. I had a hit from a small fish in by the bullrushes and that was it. A boat with 2 guys throwing spinnerbaits was making progress West along the Platte River Outlet and I didn't want them to beat me to the river so I put the trolling motor on high to get out where I could go with the big motor. On a fluke I got a 10.25" bass on the white Spro Frog as I was heading to the open water. 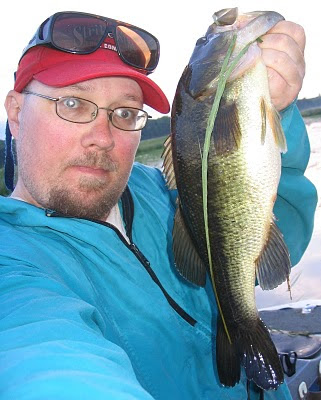 Down a little ways I missed another good blow up. I was around the 2nd bend casting right up to North/West shore when I got a good 14". I ended up working all the way around the 4th bend and did have signs of about 3 more fish but I think 1 was a dogfish and 1 was probably a pike.

There is a tournament on Platte/Sullivan on Sunday and I think if a single team committed to the river and was able to land what bit, they could possibly have a good bag of fish, but then again they might not even get a 5 fish limit. I wonder if 1st thing in the morning the river mouth might be good. I didn't hit the river mouth on the way out because it had gotten a bit foggy and it was getting dark.
Posted by Basspastor at 1:16 AM

That is a lovely fat toad. Throwing for bass and pike...that is a slice of heaven right there.