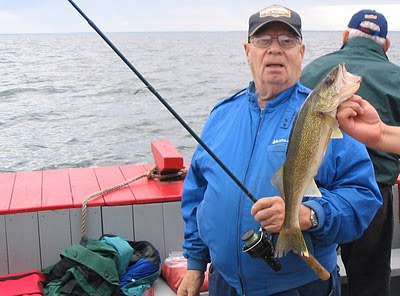 Today Dad and I went on the 8AM-Noon Eddy's Launch. Conditions were overcast with some sprinkles with a Nw wind about 4MPH diminishing to about 2MPH by the time we left. Upon leaving the harbor we took a 30+ minute ride to a feature they call Tom's. Our captain Brian said it isn't on any map. All 3 launches went to this spot.

About 3 minutes in my bobber went down, but when I set the hook my drag was too loose and the fish got away. It is bad luck to miss the first fish of the launch and just like the time that happened to me before I got skunked again. I did have one more fish play with my leech but not take it.

At our first stop Dad got the 19 inch walleye in the picture. Walleye's from 18" to 28" are protected so it had to go back. Our first spot only produced sporadic action but we stayed there until the last hour. We moved to a 2nd spot and Dad got a little perch. The second spot wasn't giving up anything and the other two launches had gotten into a good area and so we moved by them. In the last half hour I would say a dozen walleye's were caught on our launch with people missing several others. Neither Dad or I got a bite. We also watched numerous fish get caught on the other two launches. I did make a late switch to get rid of my beads but it didn't help. Our captain did keep us fishing the longest and we got in about 15 minutes after Noon.

First skunk for me on a launch this year. I suppose 75% success isn't bad.
Posted by Basspastor at 7:52 PM