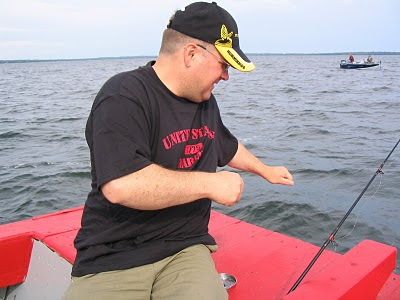 Today Pete and I went out on the Eddy's Morning Fishing Launch. The original launch we were scheduled to be on was from 8AM-Noon, but Eddy's was over run with people wanting to go out and called in a 2nd Captain to go out from 8:30AM-12:30PM. Pete and I jumped on that ship hoping there would be less people and when all was said and done there were maybe 4 or 5 less people on this 2nd launch. Another reason we jumped ship was because we didn't get the back of the launch on the 1st boat.

We left the harbor right around 8:30AM and I was a bit surprised once we got out a ways from shore just how big the rollers on the lake were. We headed out to a spot SW of Indian Point near a rise that comes up to 25ft of water out of about 28 feet of water. We weren't there long and a guy close to me got a good bite, but didn't get a good hook set. A couple of minutes later a teenage kid caught what I thought was a keeper, but maybe not as I would have the only two keepers in the bucket at the end of the day.

I was the next person to strike with a 17+ inch keeper that hit when I dropped the leech on his head with a cast. About 3 seconds after the bobber stop reached the bobber the bobber then went down. A couple of more eyes got caught that were too big, including another fish for the kid that got the first fish. Pete got in on the action with a 12incher that he threw back. We were about 2 hours in and the action had slowed and we were being surrounded by other boats so the Captain decided to move us about 100 yards closer to Indian Point and out of the other boats. Problem was that with the wind and waves the anchor didn't hold on either of two tries. The Captain then decided to go to another spot closer to the western shoreline. When we started to move off, Pete got his line caught on the depth finder transducer, he was eventually able to get it free.

At the 2nd location a few perch came in the boat, then a walleye that was to big. I had a fish, presumably a perch, chew my leech pretty good so I got a new leech. My new leech wasn't out long when I connected with my 2nd keeper of the day, a 16+ inch eye. Pete had some nibbles and I had a good hit that stole my leech. Pete and I both got a few more nibbles before the Captain called it quits about 20 minutes early.

When we got back this was my haul: 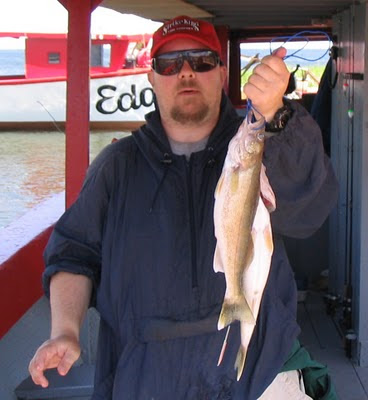 While the fish were getting cleaned Pete decided to go for some Eddy's Jetty's Jumbo's. 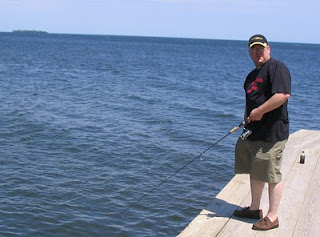 Here you can see Rainbow Island in the background. Actually in the original pic you could see Indian Point to, but Blogger didn't accept how I had the picture cropped. Pete did catch a few small perch.
Posted by Basspastor at 5:05 PM