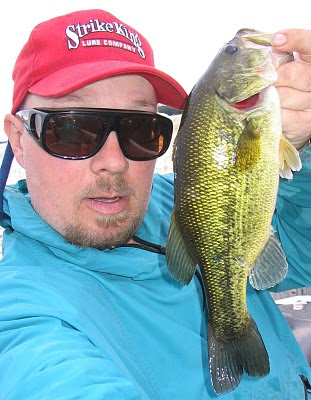 Tonight I got out for a little over an hour before it got dark. It was overcast with about a 3MPH wind out of the SE.

My first spot was to try the biggest reed bed in Platte's big center bay. In the reeds I got the picture fish (13" largie) on a brown (sparrow) Snagproof Bobby's Perfect Frog.; Not too much later a pike stole that frog, so I tied on on red/brown Bobby's Perfect. A bass was messing with the frog but didn't take it, so I pitched back to the spot with a swim jig and I got my second bass which was a 13.5". Next I caught a 20" pike on a "electric chicken" Zoom Super Fluke. While I was in the reeds I think most of the strikes I got came from pike.