Next I headed to the NW corner of the lake to fish reeds,rice, and pads. I got a 11.75" on a watermelon red Zoom Horny Toad, but the rice was such that a white Spro Bronzeye Frog was the better option and that is what I caught all the rest of the fish on. I got a 15" and 12" close to one another and had a fish hit at the frog kind of close to the boat several times. Finally the fish hit and seemed to get the frog, so I set the hook and the frog came flying back at me and the fish made a huge boil. My guess is that it was a big dogfish that pulled the frog down by the legs. I was working my way North when I got a 14.25", 13.25" and this thick 16.25" which was in the slop close to the shore. 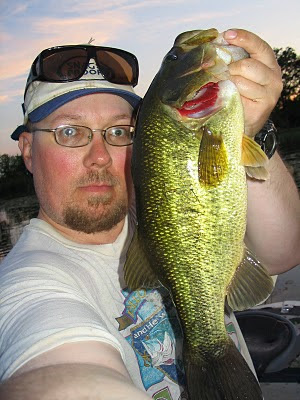 As it was getting dark I proceeded to hit what has traditionally been the best stretch of water, but both the reeds and rice are more sparse then they have been and all I got was an 11 incher.

The mosquito's were getting bad and nothing was hitting so I headed out around 9:30PM.