Today I hit the water about 6:30AM and made my way to Lake Sullivan. But before getting into Sullivan I decided to fish the channel by the bridge connecting Platte and Sullivan aka the Grumpy Old Man Hole. This is a good area for me to try throwing the Zoom Ultra Vibe Speed Worm. I went with red shad today. Didn't get anything on the approach to the bridge, but I expected to get action in close to the bridge and I did. I got a couple of bites while I was reeling the worm in but it seemed like they were just pulling on the back of the worm. After a couple of casts with no more bites I decided I would let it sink to the bottom and hop it back. Sure enough a this 15" picked it up while it was on the bottom. 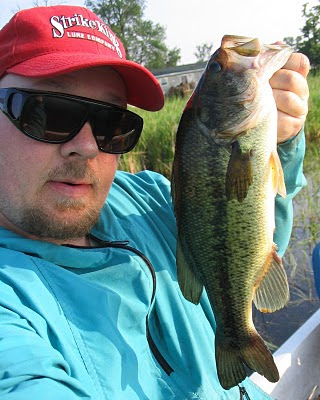 I didn't get any more hits until I was actually under the bridge and I didn't hook up, might have been a sunfish. I worked a little ways into Sullivan and did have a good hit, but I think it was a pike. Once I was past the pads. I cranked her up and moved quickly to East side of "the intersection". The intersection is the area where you can go into the main body of Sullivan, travel into the Platte River Outlet(PRO) in Sullivan, or go down the channel that goes into Platte Lake. I managed to get a 13" and 12.25" on a white Spro Bronzeye Frog. Both fish were in the rice out a ways from the reeds. Didn't get hit by anything in the reeds.

Next I went to hit docks in "Old Cabin Bay." Old Cabin Bay is where we had our cabin on Sullivan at one time and is the Eastern Most Bay of the lake. I elected not to start on the best section of docks but well before that along the point. On about the 3rd dock I got a 9" on the electric chicken Zoom Super Fluke. It was a long time before I finally got another bite. I was about 1/2 way through what has been my best stretch of docks on Sullivan when I had a hit at the corner of a boat lift from a 14.25" largie. About 5 more docks down I got a 12.5" and a little farther down the way got two 8.5" dinks. I put on a watermelon Zoom Ultra Vibe Speed Worm that had most of it's vibe tail bit off. I had a fish swirl on it out in open water I missed on the hookset with the fish taking the worm. I pitched a watermelon Picasso Jig with watermelon Zoom Speed Craw at a few docks and got a 12". I got one more 10.75" largie on the electric chicken fluke before I decided to give up on the docks.

Next I went out to the reed bed that is kind of in the middle of the bay and started throwing a white/silver Herb's Dilly buzzbait. I missed the first couple of hits, but managed to connect with an 11", 13.75", and 12.75". I worked the reed bed pretty good.

Next I was off to the NW corner of the lake, which was basically a bust until I got to the West side of the intersection. When I was first getting to know Sullivan this was my best spot on the lake. A lot has changed in the area since then and not for the better. I was pleased to see the area looking a bit better than it has for a few years and there were actually fish there. I smoked this 18" on the white Spro Bronzeye Frog up by the bullrushes in a little patch of rice. 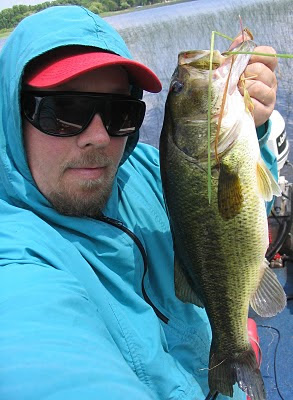 It was coming up on 4PM, I was out of water and hungry so I called it quits after having fished across to the North West side of the intersection.

another fine BP post. The weed bed is coming up in Colorado so I have to abandon my weighted jigs and going to more plastic worm action. Great fish!