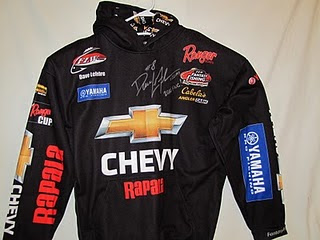 This morning on my Facebook newsfeed there was a post about the Jersey for St. Judes silent auction for a Dave Lefebre autographed hoodie. The previous auctions were done on Ebay and had various levels of success. The post on my newsfeed said they didn't have any bidders in the silent auction they were doing for this one through the blog. I thought what the heck, I'll put in bid. It just so happened that I was the only bidder.

Here's the thing, I would love to have that hoodie but my bid was under $60 and I would think if it had been on an Ebay auction it would have gone for $150 or more. Paul Strege, the guy behind Jersey's for St. Jude gave me a call to let me know I had won and I let him know I didn't feel right about getting the hoodie at the price I bid. So Paul is going to talk with Dave about what to do and the hoodie will probably go up for auction again.

I suppose I could pitch in a bit more money, but my top floor would still be significantly less than I think the hoodie is worth and I really want the maximum amount possible to go to St. Judes.

I'm sure I'll have an update about how things shake out.
Posted by Basspastor at 8:24 PM