I arrived at the GOMH by 7:30PM and it looked a bit windy out of the South. I was surprised no one was there fishing. I got out of the truck walked around back and when I cleared the truck I found out it was "a bit windy" all right; Try 25-30mph sustained. I tried to fish the SE and SE side but the wind was pretty much blowing straight in and there were white caps hitting the shore. After giving it about 10 minutes I headed to the North side. On my way I discovered my Rapala Measuring Board laying up on the road under the car barrier. I figured it had blown out of my bad, but it turns out I had left it there on Thursday night and Lantern Man put it up there hoping I would find it.

Anyway I got to the North side which is a bit protected and started flinging and I was rewarded with a 15" jumpin bullhead. I was very glad there wasn't going to be a skunk tonight. The bite gave me hope. A little while later I got another bite on the beetle spin and brought in this 22.5" Pike. 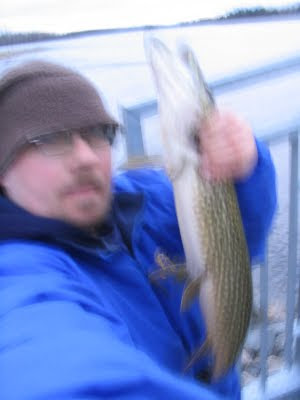 A little after getting that fish Lantern Man showed up. He said it was pretty windy last night too. Said he got a 21inch 6lb+ jumpin bullhead last night, but it was the only fish he got. After about 10 minutes LM caught a small toothy bullhead. He fished for about 10 more minutes then went to try the South side in the wind. Just after he left I got a 26" toothy bullhead on the beetle spin. A little bit after that I had the beetle spin bit off and that was the end of the action. I think I left around 9PM.
Posted by Basspastor at 11:30 PM