The Brianna (Bri) Palaniuk Bandwagon- All Aboard! 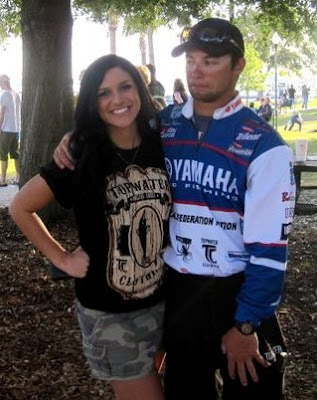 Brianna or Bri Palaniuk is the little sister of B.A.S.S. Federation Nation Champion and Elite Series Rookie Brandon Palaniuk. Her sparkling personality has gotten her noticed. It all started at the Bassmaster Classic when she was interviewed by Anglers Channel.com for some insight into how Brandon was doing. The people at Anglers Channel.com were obviously impressed and asked Bri to film a shoot with them down in Florida at the Citrus Slam. Also while in Florida Brianna got to do a Hook'd Up segment with Dave Mercer. The people with B.A.S.S were obviously impressed because they asked her to do some BassCam interviews at the Alabama Charge at Pickwick Lake. As Bass Parade blog reported her interviews were quite popular with the Internet audience. Brianna told me, "Being a correspondent of some sort has been my dream since I was a little girl." She also did an interview with Brandon for BassFIRST.com

Brandon has asked Brianna to stay and help him for the rest of the tour as a personal assistant and she is more than happy to do it. I kind of think she is having as much fun on tour as Brandon. She is hoping to do more stuff with B.A.S.S. but said at this point "nothing is in stone."

I highly encourage Bass Pundit readers to use Facebook to let the powers that be at B.A.S.S. (Jerry McKinnis, Angie Thompson, Dave Mercer, Zona, and the official B.A.S.S. Fan Page) know you would like to see more Bri. 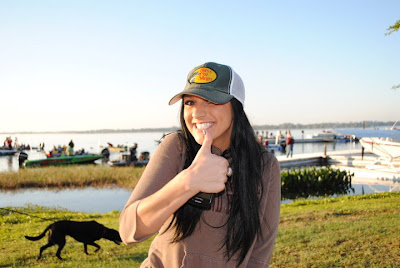 Note- I have sent a link to this post on Facebook to Jerry McKinnis,Angie Thompson, Dave Mercer, Zona's Awesome Fishing Show, and B.A.S.S.., also sent a link to Don Barone.
Posted by Basspastor at 7:30 AM

I don't get what all the hoopla is about this? You would have thought all the men who are watching these interviews havent seen a pair of tits before, sheesh.

The thing is, she's not a great interviewer, then again, who's listening anyhow when you look like her apparently.

As for the hoopla. Here is a young attractive women with a great personality that is excited about the sport of bass fishing. People like her and her brother are great for the image of the sport.

I would also say that many of the wives of the anglers are great for the image of the sport. Advanced Anglers.com has done a great job of profiling some of them in the "Beyond the Pond" articles.

Hey Anonymous,
Maybe you just ought to LISTEN to the interview, or maybe you don't understand multi-syllable words.
Anyway, give the kid a break; she's just starting, with no experience, and she's not Katie Couric -- yet.

Anonymous? Really? What a coward. Talk garbage about a young lady trying her best? Shut your silly mouth. You are coward while Brianna shows courage trying her hardest at something new. Go away "Anonymous". Brianna already has more fans than you ever will.

Anon- You gotta love redneck girls talking about bassin', unless you're one of those New York Wall Street types, but I'm assuming you're not.

That said, I'm not going to advocate to get her a job. I think that if she's really that good at it, she'll do just fine on her own.

As her step dad, its good you stay anonymous. wimp!