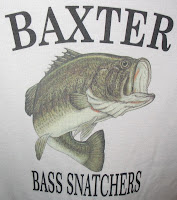 Saturday June 4th Platte/Sullivan- If you don't know Platte/Sullivan are my home lakes in this area and I have been fishing Sullivan since about 1999 and in Platte since 2001. Since 2001 I have fished 4 bass tournaments on the lakes with 2 total bombs and 2 respectable performances. I came close to winning or placing very high in August of 2004, but I was 1 fish short of the 6 fish limit which put me 1lb 3oz out of 2nd and 2lb 7ozs out of 1st. In that tournament I had a freak malfunction of my Shimano Calcutta reel with a good fish on and lost the bass because of it. Because of my checkered tournament history here and my inability to pattern quality fish early in the season over the past couple of years, I am a bit leery of this one. The Tournament is just a week after bass season opens and the lake goes off limits on Thursday. Fish numbers seem to be pretty good in the lakes right now, so I will expect to be able to catch a limit. This is one tournament where I might actually take my allotted time of half the day in the front of the boat.

Sunday June 19th Cullen Lakes- Never fished this Chain of 3 lakes North of Brainerd and at this point don't know much about them. The club last fished here June 5th of 2005 and it took a modest 13-8 to win and there were 18 limits caught out of 29 anglers, no skunks. When the club fished the lake in August 2001 the weights were better but less fish were caught. Need to do more research on this one.

Saturday July 16th Le Homme Dieu Chain- Never fished these lakes before but I know they host lots of tournaments and are fish factories but the size doesn't tend to be all that great. I thought the club had fished here once a few years ago, but now that I took a closer look they didn't. With high gas prices it could very be that my boater and I will go into this one blind. Need to do more research on this one.

Sunday July 31st Mississippi River- Now I haven't heard this explicitly stated but I'm almost 100% sure this is for the Mississippi out Brainerd which opens up some traditional river fishing in some pretty good smallmouth water along with fishing Rice Lake, which I don't know anything about. The club last fished here in 1999 in a no-prefish blind tournament and the results were not that great numbers wise, but the size of fish was pretty good. Need to do more research on this one.

Saturday August 27th Fish Hook Lake Park Rapids- Never fished here, but have had a birdie in my ear tell me about it and they say it's a good lake with lots of options. The club fished here in August of 2007 and it looks like it was a pretty good tournament with lots of quality fish; Probably why we are going back. The DNR says there are Smallmouth in the lake, but they didn't show up in the 2007 survey.

Saturday October 1st Birch Lake (Hackensack)- We almost fished this lake in 2009 and I did a little research on it then and was excited to fish it, however it got voted down at the final lake schedule meeting. The club last fished here in August 1999 and while th numbers or fish caught were not all that great fish size was pretty good. You never know what your gonna get with an October tournament in Minnesota weather wise, but hopefully we won't hit it at turnover but when the hot fall bite is on.

If anyone out there has insight into any of these lakes I'd like to hear about it. Either leave a comment or email me at basspundit@hotmail.com

Thanks
BP
Posted by Basspastor at 3:06 AM