Ice Out By Easter Update #8 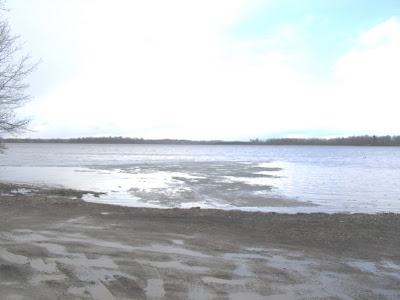 Ice Out Platte Lake
Ice Out Sullivan Lake
Ice Out Bulldog Lake
The picture is the view from the Platte Lake public access. Yes there is ice there, but you could launch a boat because somebody did just that today. I didn't take a close look at Sullivan but it looked to be all the way open from the GOMH. Today's ice out makes this the 2nd latest ice out on Platte since I moved North in 2003.

The boat that launched on Platte was fishing at the GOMH on the Sullivan side. They said they hadn't caught anything and I didn't see them catch anything. I have been skunked the past two days in a row.

The last lake I'm following is Mille Lacs which has an average ice out date of April 24th. It should be later than that by a couple of days this year.
Posted by Basspastor at 9:36 PM

Email ThisBlogThis!Share to TwitterShare to FacebookShare to Pinterest
Labels: Ice Out, Platte