Today was delightful. Sun and it was almost to 70°F. I decided it would be a good night to hit up the Grumpy Old Man Hole (GOMH) and see if anything might have showed up. I left the house at about 7:20PM so I arrived about 7:30PM. There was open water on the Sullivan side beyond where I could see going towards the Platte River Outlet, but the PRO itself still has ice well along the Southern shore. The Platte side maybe had 5-8 acres of open water. The water is as high as I've ever seen it at the GOMH, almost all the rocks are under water on the SW side.

I started on the SW corner throwing a 2" Storm Wildeye Swim Shad. After trying that for a while with no luck, I had a hunch that I should go and try the Platte side of the bridge, so I went over to the NE side. On my very first cast to a spot that held lots of fish last year, it was bullhead on!!! 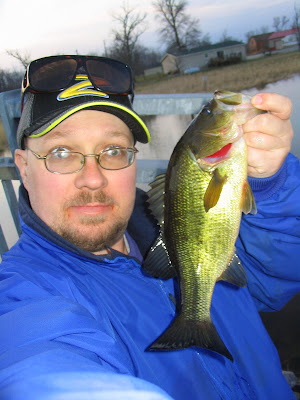 It was about 13" or so, I didn't measure it. I didn't have any luck and after about 10 minutes a young beaver started swimming around in the area and smacking it's tail every once and a while. I tried a few different things without any luck. At about 8:10PM I switched back to the SW side. Right before I switched sides another bigger beaver showed up. 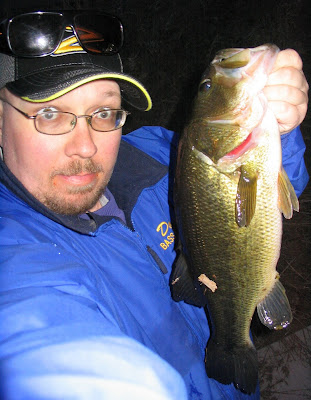 This one I did measure and it went a bit over 18". It wasn't very fat, so it might have been a male. After a few more casts with nothing I switched up to a Cubby Mini Mite under a bobber. I got a hit on that but missed it. Eventually it got to dark to fish around 8:35PM.

Nice to see my first fish of the year.
Posted by Basspastor at 10:18 PM