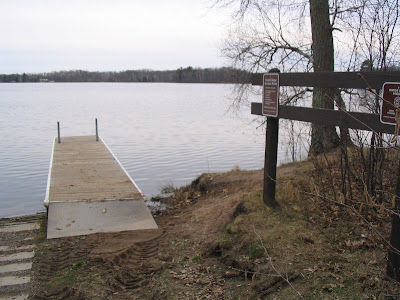 The Rock Dock didn't bring me any luck, not even a bite. I left at about 7PM to head to the Grumpy Old Man Hole.

I parked on the NE side and started fishing on the NE side, Nothing. I then headed to the SW side. I was throwing the Vampire Orange(Red/Black) Berkley Havoc Pit Boss for dogfish and on about my 3rd cast I got a 13.5" blind in one eye jumpin bullhead. I switched up to a beetle spin and caught a little toothy bullhead. About 10 minutes later I got a 16.5 jumpin bullhead on the beetle spin. A couple of minutes later I had a small toothy bullhead swipe at the beetle spin but not get it. Then there was nothing for a long time. I decided to try to put a 2" Storm Wildeye Shad on a beetle spin, didn't get any hits on that. It was starting to get dark and so I decided it was time to break out bobber with the pink Cubby Mini-Mite. I was working it just a little ways out and the bobber started scooting off. I set the hook and the fight was on. I pretty sure it was a nice, but not huge, jumpin bullhead, don't know for sure because it got off. A couple of minutes later in almost the same exact spot the bobber tipped over, so I set the hook. Sure enough a silver bullhead had just inhaled the Cubby. I didn't have a bucket with me so back it went. 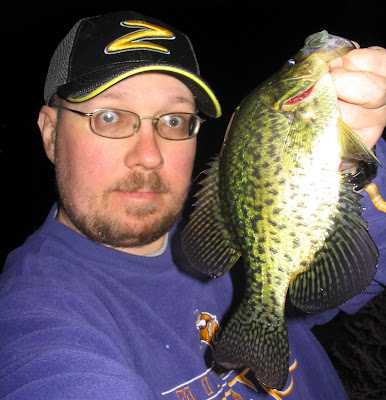 . It got dark enough that I had to put a light on the bobber. After about 5 minutes with the light on the bobber started moving to my left, so I set the hook and got another silver bullhead that just inhaled the pink cubby. I had the bobber move off one more time but I missed it. I left a little after 9:30PM.
Posted by Basspastor at 10:42 PM