Morning Fishing Report: I got up at 5:30 and headed to the GOMH. Don W. was there already but he hadn't gotten anything. I managed to get skunked, though I missed a few bites and had a jumpin bullhead on. Don caught one silver and a bunch of little oranges on waxies. By 7am, I had enough and left. There were two guys that arrived the same time as me that fished the NE side and they were catching some kind of bullhead over there.

GEM outing at Rush Lake... Nobody told the BP about it. Oh well doesn't look like they needed me. 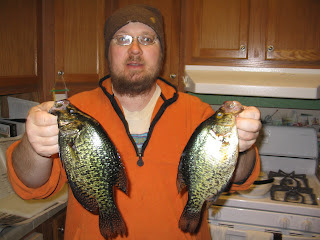 Evening Fishing Report: I headed to the GOMH at 6:30. The SE side was open so I took that. Once again Lee Ander was there with family and Willard was on sight too. Lewis made an appearce later on so all the Grumpy Old Men were accounted for. There was lots of coming and goings on this night and boats were fishing both sides (N&S) of the GOMH. I started out fishing with maggies and a glow Cubby Mini-mite. It was slow at first but as the night progressed the action got faster. My first fish was an orange bullhead, followed up by a small jumpin bullhead. I missed several bites but eventually got dialed in to a zone to the East of the current. Around 7:30 I got my first Silver which I gave to Lee Ander. About 20 min later I had another Crappie on then missed it at the bridge. I was sporadically hooking several orange's by now. I then caught a couple of more silvers, then switched to minnows and got hit immediately 3 times catching 2 nice fish. After another silver or two I had one on that collided with the weeds and my line broke. I switched to a glow ratso with a big hook and kept working minnows; I got my last two silvers on this. All in all I went home with 7 having released a couple of small ones and having given 1 to Lee Ander. It was a nice night to be out 75 degrees slight SW wind. I would say I did as well as anybody because the SW side was not fast and furious with the silvers.

Fanatasy Bass Fishing Notes:
BASS G-Ville: Both Teams have 2 anglers in the top 12 KVD & Horton, Miyazaki and Jordan. Mason was a no point stinker for BP1. IKE rallied and got points on the board for BP boys. The success of this tournament hinges upon those top 12 performances tommorrow.
Posted by Basspastor at 7:22 AM