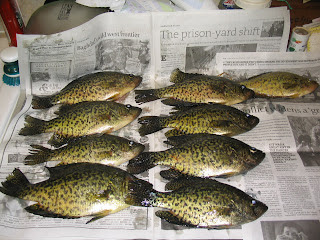 Fishing Report: Headed to the GOMH at 6:20PM. There were three anglers fishing the SW side. Also at the GOMH was grumpy old man Willard. If he said bacon once, he said it a hundred times over the evening.

Since the SW side was covered with anglers I took the not nearly as nice to fish from SE side. In the first hour I fought two big bullheads but they both jumped me off by slightly bending the cubby hook out. The first hook up was at least a 4lber that jumped numerous times. A lady fishing the SW side said if I gave her the bass to keep, she would give me a couple of brewski's. I think she was half kidding, but then again maybe not.

I landed my first fish, which was a 2lb jumpin bullhead after I had been there about an hour. I was fishing a busted Cubby body with a minnow. I landed two more jumpin bullheads, a 2 and then a 3lber. About 8PM the people on the SW side started getting some action with orange bullheads then by 8:20 some silvers started showing up. I caught an unlucky break when a slimmer broke my line sending my Wing-It bobber into Sullivan Lake. However soon after that my luck changed because the guy and the girl fishing the SW side caught enough fish and packed it up. I immediately took their place.

For the next 20 minutes or so I proceeded to whack and stack silver bullheads on Dad's set up from last night (Chart flu flu and a minnow). Another guy showed up while the action was hot and he immediately started catching them too. As it was starting to get pretty dark the 1st guy left and the action slowed. I put on my lighted bobber and got about 4 more fish. The action slowed the darker it got. I got my last couple of fish on another set up with a Glow Demon. All in all I kept 9 (see pic) and released 3-5.

Word on the street is that Santa Claus Don woke up early and smacked em good in the morning around 6am. He said he also got a 5lb jumpin bullhead.

More Closed Season Vigilanteism at FM.com: Targeting Bass before they are open (Duffman takes a shot at the BP in his post) and Lawbreakers

Hey Duffman, in case you aren't paying attention, I actually do fish for Dogfish. I am the 2004 and 2006 Minnesota Bowfin Club Grand Champion. I will try and repeat again this year. I think I may have missed a my first doggy of the season the other night. FYI I was fishing for Crappies at the time.
Posted by Basspastor at 12:57 PM

Nice post, its a really cool blog that you have here, keep up the good work, will be back.