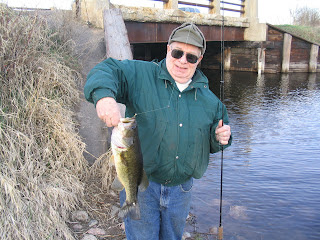 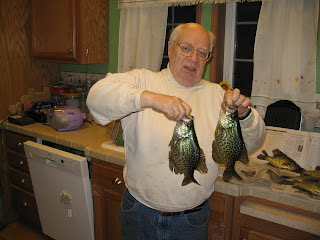 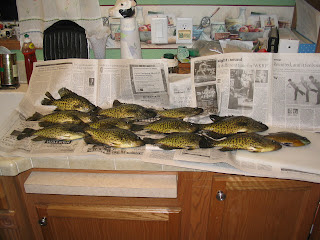 Fishing Report 4/23: It was a nice night of fishing with my dad at the Grumpy Old Man Hole. There were 2 Grumpy old men (Lee Ander and his brother Lewis). Dad had quite the time chatting with Lee Ander. The weather was a mild 60degrees with a slight breeze out of the west.

We arrived at the GOMH around 6 pm and there were several trucks parked. I thought we were gonna get shut out of the good spot, but as it turned out only Lee Ander was fishing and he wasn't catching anything. Dad and I headed down to the SW shore of the GOMH and set up shop. Dad had a yellow flu flu with a minnow and I was fishing a white Cubby Mini-mite. Things were pretty slow for the first hour or so with Dad missing a couple of bigger fish, probably bass. Eventually I gave in and tipped my jig with a minnow and after about 15 minutes I reeled in a jumpin bullhead of about 15 inches. Not long after that Dad tied into the Jumpin Bullhead in the first picture. I figure it was about 16 inches. I had a fish steal my minnow and Cubby tail.

About 7:45 dad landed the first silver bullhead. I was having a problem with my rod being tangled and before you knew it dad had landed three fat specs. About the time I got my rod situation straightened out Dad lost his bobber for the 2nd time. This time the bobber was out in current and went bye bye; we were able to retrieve the bobber the first time it came off. I let dad use my rod while I rigged his pole.

Round about the time I was getting dad's pole ready, our friend Don Weinmeister showed up. Don was using waxies and started catching Silver and Orange bullheads straight away. Dad and I were still catching them but not as fast as Don. I eventually switched to maggies and the bite for me picked up a little bit between the silver and orange bullheads. The bite was steady until it got to dark for me to see my bobber. All totalled we brought home 11 silvers and 1 orange with a couple of small silvers and oranges released. Don managed to get 9 silvers. A guy was showing up to fish just as we left, it was quite dark by then.

The Suckers: Stopped by the Rum River where it runs into Shakopee lake. The suckers are running thick and spawning like crazy. It was a cool site.