Lost and Found at the GOMH 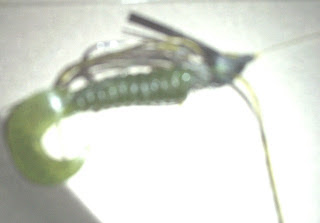 I got my lost swim jig back!!! I wore my chest waders to the GOMH and waded a little ways into the cattails and there it was, so I grabbed it. I was one happy camper in the smoke from the burning cattails from the NW side of the GOMH. I have no clue what the point of them burning that stuff out is; They burned it last year too. Lantern Man and his girl were fishing the SW side, they offered for me to join them there but I wanted to fish the swim jig on the SE and NE sides. It was maybe a little after 7pm at this point.

I got the swim jig tied on and went about casting on the NE side but didn't have a luck. It turned out a teenager was fishing one of his departed grandfathers lures and got it stuck in the Cattails. I didn't think I would be able to get it because it was out at the edge, but it turned out to be a hard bottom and I was able to retrieve it. It was some type of jointed lure with a propeller in the middle. The kid was quite greatful. At that point I started fishing the SW side and I got a solid jumpin bullhead right away. I then pulled a 19+" jumpin bullhead and thanks to having my waders on was easy to land. Soon after that I hooked up on what I thought was another toad, but it turned out to only be 17.5".

The rest of the night I switched off between the SE and NE side catching 11 jumpin bullheads and 5 toothy bullheads on the "lost" grn/brn/chart Tom Monsoor swim jig. I got GOM Willard his limit of pike and he was happy about that. One of the teenagers fishing there tonight was the same noisy kid from a couple of days ago. He was using a Daiwa Procaster baitcast reel that he had bought and was quite proud about it. Just like the other day he complemented me on my Team Daiwa reel. He was fishing a white single colorado spinnerbait and I think he caught 4 pike and 12 or 13 bass.

At one point I helped Lantern Man by wading out to get a small toothy bullhead that had swam into the Cattails. The waders definitely came in handy. LM and his girl caught a few silver bullheads but they were mostly to small to keep.
Posted by Basspastor at 11:38 PM