Tonight I got out fishing for about an hour until it got to dark to fish. I gave Jenny's a try from shore and didn't get a strike. I then went to the boat and set out to fish water I thought would be good for poppers. Conditions were overcast with about a 7MPH wind out of the North. I fished a bit of the North side of the big Island and down the Eastern shore where Pete caught a few bass last week.

I took the suggestion from Big Indiana Bass to tie direct to the Yellow Magic Popper. I believe the line I was using was 17lb Gamma Co-Poly. It did seem to help in working the bait just a little bit, but it was still pretty inconsistent in terms of performance. The chop on the water might have had something to do with that too.

Even though the objective was to put the Yellow Magic Popper through it's paces, my first fish actually came on a bullfrog Berkley Frenzy Popper. 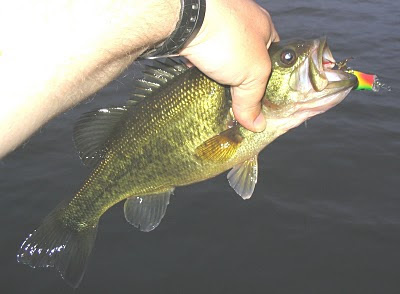 I was using the bullfrog color because of the overcast and it is similar in color to the lime Yellow Magic. The fish was about 12.75". As soon as I caught this fish I switched to the YMP.

A couple of minutes later I had this dude swirl and get hung on the YMP. 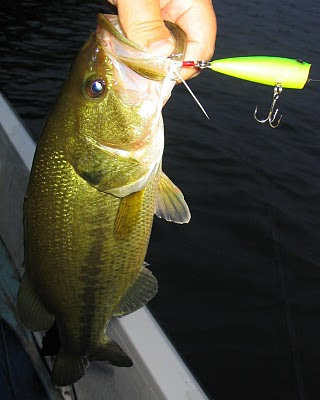 I am not sure why I didn't get more action than I did. Maybe the fish were turned off for the most part. For the second night in a row it was a pretty equal showing for the two different poppers.
Posted by Basspastor at 10:22 PM

HA! In a few months from now...those poppers are going to need a fur coat!

Good to see you can get Yellow Magic Popper at other places besides Bass Pro -http://www.landbigfish.com/showcase.cfm?PID=7264&SiteID=1485