Tonight I didn't get on the water until after 7:45PM and then on the way to my first spot there was a boat in need of a tow, fortunately not far, and that took up about 10 minutes of fishing time. I started off throwing my new lime Yellow Magic Popper. I made a great cast right up by a dock and two jetski's on lifts. Sure enough this 14.25" largie sucked it in. 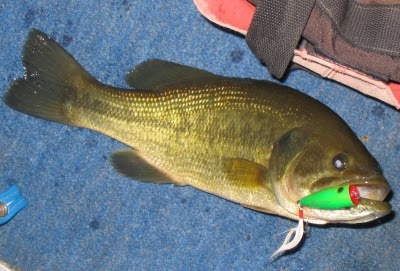 I did throw back to the spot a couple of times and didn't get anything. I pitched in a blue/black craw tube and had a small bass pick it up. On my hookset the little guy went airborne and came off.

A little farther down the way after I had tried some Snagproof Frog fishing in some slop, I had a smallish fish, maybe a pike, hit at the Yellow Magic and not get it. I tried casting back to the spot without luck, so I picked up a purple Berkley Frenzy Popper and tried that without any luck. On the next dock I got a 12.75" on the Frenzy Popper.

On the next dock down I made a cast which spooked a great blue heron which promptly flew right into my line. I let it take out a little line before closing the bail and as soon as I did the heron dropped down into the water. I figured maybe I could get in behind the heron and find the Frenzy Popper, take it off and then reel in the line without any problem. It was kind of dark and the area had weeds, so I wasn't sure I would be able find the lure. While I was looking the heron took off and was totally untangled from the line, so it was all good. I didn't have any more hits from fish.

More thoughts on the Yellow Magic: I haven't yet mastered control of the lure. It seems like you can be working your rod a certain way and the bait reacts differently with each twitch. Sometimes the lure slurps but most of the time it doesn't. I threw the Yellow Magic twice as long as the Frenzy Popper tonight, yet ended out at 1 fish a piece.
Posted by Basspastor at 11:14 PM

BP said: "I haven't yet mastered control of the lure. It seems like you can be working your rod a certain way and the bait reacts differently with each twitch."

Tip: Get rid of the snap/clip and tie direct using mono (no loop knots, use a knot that will cinch down good), even if you need to add a leader to braid (don't tie direct to braid for this type lure). You will gain control of the bait action when the knot/line gains control of the lure.

Interesting- I will give this a try. However, I will consider it a strike against the lure that it's action is impaired by a Norman Speed Clip. Berkley Frenzy Poppers work just fine with the clip. But the BFP has a split ring, so I think I will also try putting a split ring on the YMP.