Mad Maxx- In the Mail to On the Water.

Today my shipment of Tru-Tungsten Mad Maxx frog arrived from Bass Tackle Depot and tonight I got to try them out. I got out for about an hour up until dark.

My first stop was off the shore at Jenny's. Right away I was impressed with how far the frog casts. I don't know how much the frog weighs because it doesn't say on the package and I haven't been able to find that info online. Maybe I can't throw it as far as a Spro but what other frog does?

When I tied it up I cut the legs a little shorter and uneven; I've found doing that helps the side to side action of slop frogs. This frog has a tendency to glide a little bit which is good for walking the frog. I'm not the best frog walker in the world but I could get the MM to do it. Another feature that seemed to work as advertised was it didn't sink and it didn't seem to take on water.

I started out throwing "Big Sexy" which is a white/Chartruese/light blue colored frog. On about my 3rd cast I had a good fish boil hard on the MM as I was walking the frog. I seemed to be hooked up for a couple of seconds but then it got off. It definitely was a good fish and might have been a dogfish. I made several more casts with "big sexy" and then I switched to "Grapes of Wrath" and got this fish. 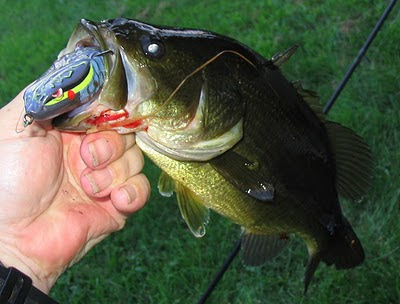 I did have a couple of small fish probably sunfish also hit at the bait.

Next I headed to the lake place to take the boat out for a quick trip in the general vicinity of the lake place. First I thoroughly fished from the dock and didn't get a hit. I took the boat out and headed East getting hit by something small that didn't get the frog. I worked myself 2 docks down and it started getting kind of dark so I headed back. I pulled the frog off some lilly pads and a fish boiled on the frog but didn't take it. I cast back and once again the fish bumped it but didn't take it. On the 4th cast it committed and I caught this chunk of a 17". 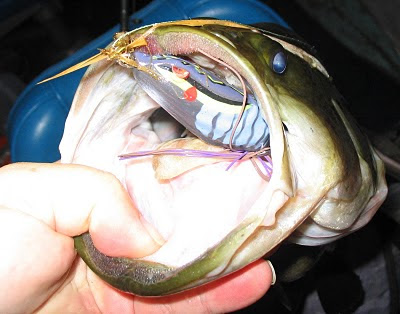 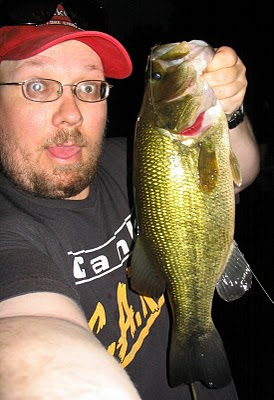 As you can see from the pick it really engulfed the "Grapes of Wrath" MM.

Since I had this luck in front of our jerk neighbor Sherman's dock I quickly moved over to the lane in the rice by our cool neighbor Jim's dock. It was so dark I went to the lighter colored "Big Sexy" and I cast it right up by the dock. Sure enough a fish swirled and just like that my frog was gone. Dang Pike. I quickly moved to the area of the strike to see if maybe the frog was around, but it wasn't on top and it was now too dark to see in the water. I would think it would have floated if it came loose from the fish. Didn't even catch a fish on that frog.

Great fish BP! It's fun to see you whacking them on a new lure!